I hope you’ve enjoyed part one of this current series, in which we explore some of the basic teachings of CHEK Exercise Coach (CEC) training.

Today, we will explore part two of the three part series, looking at the principle of isolation to integration.

After that, I’ve got some really fun things to share with you as well. 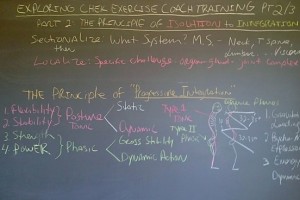 In my vlog today, I explore what I refer to as The Principle of Isolation to Integration.

In my presentation, I give an example of the correlated principle of sectionalizing and then localizing that I learned in electronics school as a soldier in the army; I was learning to repair weapon systems on Cobra Attach Helicopters, which are very complex systems of systems.

Here I speak of sectionalizing as identifying (for example) that your patient/client has low back pain (section of the body), but once we’ve located what section has a challenge, we then need to isolate to the specific segments that are challenged.

I then explain how we can use the Piano-spine diagram on p. 121 in my book, How To Eat, Move and Be Healthy! to further sectionalize which glands or organs may be contributing to, or suffering from the dysfunction.

1. Identify the physical source of the patient’s pain.

2. Identify the 4 Doctor behaviors that are the likely etiology (cause) of the dysfunction at any and all relevant levels.

I next explore the CHEK Principle of “Progressive Integration”.

In this section of my vlog, I share the model I created out of a lot of clinical experience, largely with patients considered to be medical failures (the patients the doctors didn’t know what the hell to do with!…).

My system of Progressive Integration has four essential steps, that if not followed carefully, greatly increase the likelihood of incomplete rehabilitation, conditioning, and preparation, as well as increasing the likelihood of re-injure, which is common.

The four stages of Progressive Integration are:

1. Flexibility: We must restore functional balance to the musculeskeletal system (posture). I describe two essential classes of posture, which are static and dynamic posture.

2. Stability: We must reestablish functional stability in both the musculoskeletal system, and all autonomic systems if long-term results are to be expected. Here I refer to two kinds of stability:

A. Gross Stability: Muscles like the outer abdominals that cross many joints are considered “prime movers”, yet they also serve primary functions of “gross stability”; stabilizing many joints against loads too great for segmental stability.

B. Dynamic Stability: The ability to keep your joints in optimal working position in any combination of both joint speed and movement planes.

3. Strength: Only once we’ve prepared the body by balancing, are we likely to get the results we desire with strengthening the body. If we increase how much force the body can generate internally (and externally) without adequate postural and stability underpinning strength development, we simply magnify previous imbalances and create new ones.

This dramatically increases the risk of injury. I show that not following this approach is one of the reasons we now have a population of fit-sick-people!

4. Power: Power is a term that means work relative to time. Where strength looks simply at how much a person can lift, power expresses how much they can lift in a given time period.

Considering what I stated in regard to strength development atop an unprepared body-mind, just imagine what will happen to the same person when exposed to lifting heavy loads at high speeds…?

This is the common conundrum of our day with so many unprepared people jumping into programs like Cross-Fit, PX 90, and other such “self torture” events…

My statements here should not be interpreted to mean that I don’t like such training methods.

To me, there is not such thing as a “bad exercise”, only an “incorrectly prescribed exercise” or exercise methodology. Any method is ideal for those that are ideally prepared.

During my discussions in today’s video, I also share information about spinal curvatures, the importance of measuring and restoring them, and other related issues.

These are some of the MANY things you can learn as a CHEK Exercise Coach!

To learn more about CHEK Exercise Coach and our other Advanced Training Programs, feel free to visit: www.CHEKInstitute.com

Those of you that are interested in the kind of information I’m sharing here and what to get started learning in more depth right away can explore the following resources.

Paul and Penny Celebrate 18 Years of Love and Marriage! 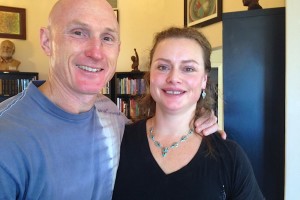 On March 29th, 2014, my lovely wife “Penny” and I celebrated our 18th anniversary together.

I was excited when she showed up to our Leadership meeting yesterday wearing her new anniversary jewelry I purchased for her.

It is hand made by an American Indian craftsman and I was excited to give it to her. I thought the colors would look good on her, and they do!

Penny is my best friend. She has helped me through everything you can imagine, and I’ve always done my best to be there for her too. Penny is really, truly, and honestly the Mother of the CHEK Institute.

When Penny first met me, I was broke, and broken hearted due to all the resistance I got to my message in the early years.

I couldn’t get American’s to take me seriously, and lost everything I had trying to run workshops. Fortunately, through a chain of circumstantial events, there were people in Australia and New Zealand that had found my teachings and wanted me to come teach there.

Well, I did, and the rest is history…

I began getting calls and letters from Americans that went there on vacations, only to find that the trainers and therapists there practicing “CHEK”, were far more advanced than anything they’d ever seen in the US.

They all wondered “why aren’t you teaching this to us in the US?”…

Little did they know how hard I’d tried.

Well, I met Penny while teaching at the Australian Institute of Sport in Canbera, Australia.

We only knew each other for four days before we got engaged, and she’s been my best friend, and most loyal, committed supporter every since. Penny took me from being broke to being a multimillion dollar business in just five years!

Thank You Penny, for all your love, support, and for being my Buddha every day! You are the greatest lover I’ve ever known.

I love you!
Paul

As I suspect many of you can imagine, being the Founder of an educational institute with worldwide reach, having other businesses, coaching patients and clients day in and day out, while also producing my blogs and articles for a wide variety of sources, not to mention a long string of media engagements, life can be challenging and compressed at times.

When I get letters like the one I share below from Eric Hulse, HLC 2, and elementary school teacher, I feel wind under my wings!

Eric Hulse (Elliott Hulse is his brother) started a 4 Doctors Club for his kids and this is the note and some photos he sent me and Vidya.

I can’t resist sharing it with all of you:

I wanted to share with you and Paul what I’ve been doing with my students! I just started a club called the Woodward (the name of our school) Wellness Warriors. I have about 10 awesome kids!! It’s been the highlight of my week! 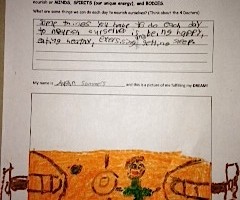 Today we spoke about why it’s important to have a dream, the 4 doctors (with a focus on Dr. Diet), and we are starting a school vegetable garden. 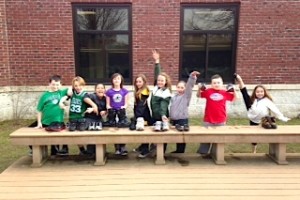 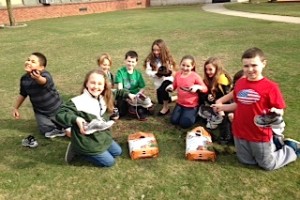 I’ve attached some pictures for you to see. There are pics of them sowing seeds, holding up their shoes, and an example of a worksheet they worked on.

(Just in case you can’t read what my student wrote about WHY it’s important to be healthy so they can fulfill their dreams it reads: “Some things you have to do each day to nourish ourselves is being happy, eating healthy, exercising and getting sleep”).

I’ll keep you guys updated. Next, I’ll be teaching them the 4 Doctors songs and we’ll begin planting our vegetable garden!

I also ordered Exuberant Animal and can’t wait to do it with the kids when we talk about Dr. Movement! Thanks for the recommendation!

Hope all is well!
Eric Hulse

THANK YOU ERIC HULSE for sharing your love and the CHEK Teachings so beautifully with the little-people who need them most!

You are a great inspiration to all of us Eric!

What a great joy it is to see a schoolteacher using my methods in class. There are several others like Eric sharing my work in schools as well, such as Nestor Gonzalez, HLC 3, father of CHEK HLC Instructor Jator Pierre.

Several years ago, Penny identified that my educational programs were now being used in over 40 universities worldwide, which was also a great feeling for me. 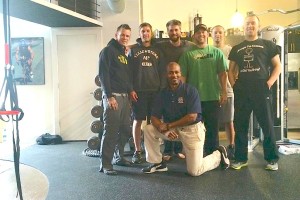 Terrence has been working toward his certification as an instructor for some time now, so it’s great to see Terrence sharing his many years of experience with his students. Terrence is what we call a “real deal athlete”. One look at his body and you’ll “get it”.

Great Job Terrence and Much Love to all your students!

Congratulations to Dan Hellman, P.T., CHEK Instructor, and his students who all just completed CHEK Practitioner Level 1, March 31-4/4, 2014 in Toronto.

Dan Hellman is one of my most senior, and most experienced instructors. Dan is also a skilled physical therapist, so he brings a lot of unique clinical experience to his students.

I LOVE Dan Hellman and his amazing teaching, and if you ever get a chance to see him or be one of his students, don’t miss it!

Thanks for your ongoing love and support of the CHEK Institute and all it stands for Dan!

Well, that brings you all up to date in my life!

Have a great day!