← Vital Is The Spring! A DAY OF ART AND INNER-EXPLORATION →

Happy Monday to You!

I hope you all had a fantastic, restful, playful weekend – I did!

My last client before my weekend began was Robbie Maddison. 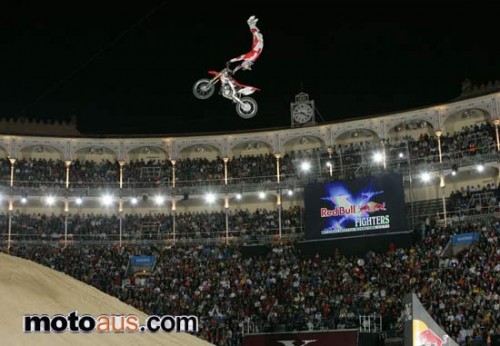 Robbie is world famous for his amazing motorcycle stunts. There’s probably nothing that Robbie can’t jump on a motorcycle, including the London Bridge!

I’ve been working with Robbie for a few years now, mostly to get his body working again after bad injuries. 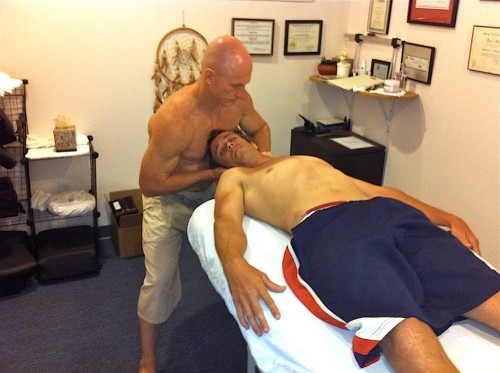 Robbie recently had a bad crash that resulted in the motorcycle flipping up in the air and landing right in the middle of his back, breaking his spine and collapsing his left lung.

He was about a minute from dying from congestive heart failure by the time they got him to the hospital. This is the third time Robbie has collapsed a lung, and fortunately, he knew exactly what was happening and had to tell the medics what to do for him so he didn’t die!

When they took x-rays of Robbie, they saw that his second rib was dislodged and was pressing into the heart area, compressing his aorta. The doctors were concerned because they would do more damage than good with surgery.

Robbie came to me to see if I could get the rib back in place. When he came, the rib was sticking out of his upper chest making it looked like a broken clavicle.

I worked with Robbie for a few visits to reposition the rib, release a lot of scar tissue and adhesions, correct his atlas position, and teach him how to breath properly.

Robbie was unable to inflate his left lung normally, resulting in a very distorted breathing pattern that was inducing a scoliosis throughout his spinal column.

In just two visits, we got Robbie breathing normally again and balanced his rib cage as much as possible at this stage of his healing. He’s looking and feeling good again and is making a great recovery.

Robbie is a very spiritually tuned man who eats and lives well. I’m sure he’ll come back and stun the world with his next trick soon! 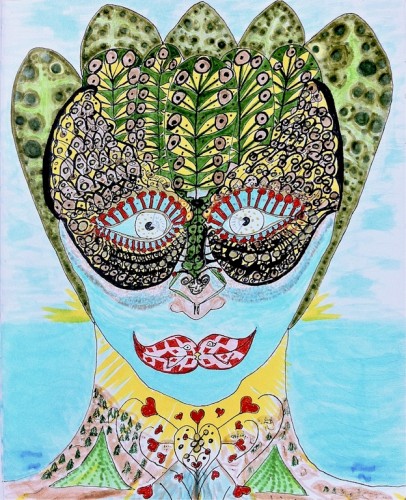 While relaxing this weekend, I was inspired to draw. I had this vision of Mother Earth and decided to do my best to draw Her. Though there are many symbolic messages in this drawing, it would be too much to explain in a short blog.

The large insect sitting atop her nose is a Praying Mantis. The Praying Mantis is an insect we use to use on our farm to control plant parasites.

As we heat the earth up and create imbalances in the soil and water, we will face more and more problems with plagues of bugs coming to balance Mother Nature for her own survival.

The Praying Mantis is a great friend to have when being swarmed by potentially unfriendly insects that eat your crops, and potentially you too!

The wings of the butterfly are represented in her cheeks, eyes and forehead, which is a symbolic representation of the soul.

The two fish kissing that make up her lips are a symbol for life. They are colored in red and kissing each other good-bye because we have succeeded in poisoning the oceans and fishing them out to the point that sea life, and our own survival is now threatened.

The sun is setting low, in Her neck. This is drying out the earth, reducing the chances of crops surviving and even decreasing vegetation on the mountains while at once, increasing the size of our deserts world wide.

All the while, She is expressing love for her children, yet she has the look of a tired daycare nanny, anxiously awaiting a long winter (ice age) so she can get some much needed rest before her next round of creative gestation.

I normally draw pretty fast and rarely ever work on a drawing for more than a day. This drawing took me about a week to finish due to the many layers in the drawing. I hope She carries a personal message for each of you. 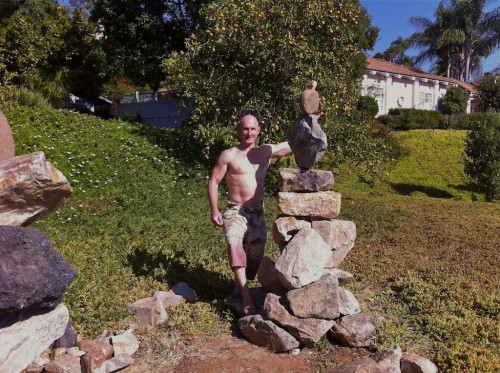 This weekend, I got out into my rock garden for some creative exercise.

Where you see me here with my newest creation is where Troy Casey’s (amazing and long standing) stack was. Troy’s stack finally got covered in spider webs and began to fall apart after being up for several months.

I dismantled it and began something new. Between taking Troy’s large stack down, organizing the rock so I can move safely, and building this one, I got several hours of solid exercise and creativity in the sun. 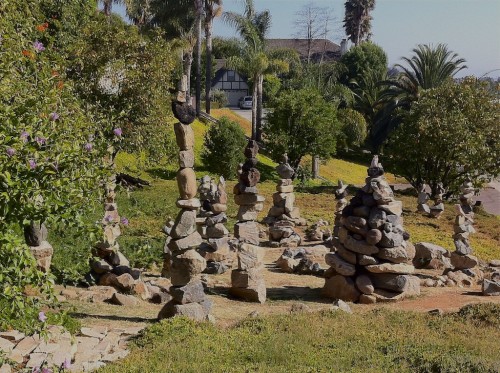 If you are on the road working or away from home, looking at this photo in a meditative state should give you a nice grounding effect. This is my rock garden as it appears right now!but not for long!

I’m working with my client Jason Pickard and his girlfriend at the house today and we will be creating some new stone Buddhas to add to the garden today.

The large cone shaped rock formation is my water charger. It is hallow inside and is full of glass bottles of evain water. The stones collect light from the moon, sun and stars as well as the earth energies and imprint them into my water.

Everyone that’s tried my water is always amazed at how it feels, acts and tastes in their mouth and body.

Depending on the time of year and the cycle of the moon, the water can be very different. Sometimes, particularly when there’s a full moon and lots of sunshine, the water takes on so much energy it literally dances in your mouth, as though it were carbonated! It soaks right through your tongue and tissues in an amazing and mysterious way.

When I drink it, I experience improved mental clarity and energy.

The stone seat you see in the distance just before my most recent stack is my meditation seat. Just behind my water charger is a stone circle with another meditation seat. That’s where I do my tai-chi at night as the sun is setting.

I hope a relaxed gaze infuses you with all my meditative, creative joy!

Well, here we are, at the bottom symbol of the Chek Totem Pole (CTP).

We’ve covered my 1-2-3-4 approach to developing an effective motive for healing and a holistic living philosophy, which was the first thing we covered in the series.

We then covered mastication/eating, vision, balance and hearing/listening, upper cervical function, visceral function, limbic/emotional relationships, the sacrum and its relationship to the central nervous system, and now the slave joints.

The bottom symbol represents slave joints, as I call them, because they serve as the slaves to each and all symbols higher up in the CTP. They are slaves because the body will sacrifice any of the joints, muscles and body parts necessary to keep each and all of the higher symbols and systems functioning optimally to ensure your survival.

The slave joints include:

– The spinal column from C3-L5

The key message to garner at this level of the CTP is that problems in any of the slave joints are most commonly the result of compensation stress from changes made by the central nervous system (CNS) to keep you alive.

Approximately 85% of all orthopedic injuries are “idiopathic”, which means that the patient doesn’t know what caused the pain to being.

In my experience from assessing thousands of patients over my career is that at large, most problems in slave joints are the result of problems that have not been identified and addressed in the higher order systems depicted in the CTP structure.

That said, if any of you suffer from chronic, unresolved pain or problems in the joints depicted in the slave joints section of my CTP, you may be best served to find a CHEK Level 3 or 4 practitioner near you. You can find them at www.chekconnect.com in our locator system.

I hope you’ve enjoyed the tour through my CTP and that you’ve learned a few things that will help you and your family stay healthier.

We leave Wednesday morning early for Toronto, so I’ll be delivering my PPS Coaching call tomorrow instead. I’m really looking forward to my PPS Workshop: How To Find and Live your Legacy! We’ve been getting some last minute signups so that is good! I’ll see everyone there soon!