THE FABRIC OF THE COSMOS

A Beautiful Wednesday to You!

I had a very productive day yesterday. That always feels good to me. I love creating.

I did my usual morning tai-chi, a nice pulling and lunging circuit session, and finished my day by creating a couple new rock stacks in my garden.

The CHEK Institute hosted the first in a monthly webinar series yesterday titled, You Are What You Eat!, which went well. This is a fantastic way for me to add value and increase participation through my teachings.

For those of you interested, you may also purchase my audio program of the same name available from the CHEK Institute.

THE FABRIC OF THE COSMOS

I really enjoyed this presentation. He begins his exploration by sharing the current findings of quantum physics and physics regarding the nature of space.

Where scientists have previously thought space was essentially empty, the current investigations show that space is actually highly structured.

Space is now being revealed as both an infinite source of energy, and as something akin to a matrix, within which all things exist.

I always enjoy learning about what science is finding and how current findings often overturn past findings; many of which had become dogmas for those that anchor themselves in current, or socially accepted beliefs instead of exploring their mysteries within.

What is now being revealed about space has been shared through many religious and metaphysical teachings for potentially thousands of years.

What Greene revealed about the structured nature of space is akin to what is called Indra’s Net in Hindu religion and metaphysics.

There are also advanced teachings based on sacred geometry in a variety of wisdom traditions that reveal what science is now finding to be true based on their experiments.

I quite enjoy knowing that even the most left-brained people in the world can now be led by science to better understand the amazing beauty and intelligence of the universe.

Next, Greene shares information about the illusion of time. This kind of exploration is always good for people because it helps them realize that time is a construct of mind.

We often forget that time is only as it is to us, here on earth. We may think of time in years, but our years are only earth years.

We often ignore the fact that our minds can travel the universe in a dream-state; we can sit in a chair, and travel to stars light years away, explore, and return in just a few minutes, yet the same journey would take untold light-years if we tried to do it in a space ship locked in a physical relationship with time.

Many healers and remote viewers have expressed their finding that time is a construct that we can rise above and move forward or backward with conscious intention.

This section is very good because it explains entanglement and non-locality. When one understands the non-local nature of particle interaction, or what Einstein called “spooky action at a distance”, we also understand how we can love anyone and help them heal, regardless of the apparent distance between subjects.

In the final segment of this two DVD package, he explores the current scientific thoughts around the issue of universe, or multiverse.

This section is very good because it helps people with rigid ideas based on Bible cosmology explore new, scientific ideas.

The multiverse concept is also on that has been used by shaman for thousands of years to shape-shift, astral travel, and heal at a distance.

I found this program to be both enjoyable, and a great summary of concepts that are typically hard for most people to understand when reading about them.

The graphics are excellent and the explanations entertaining.

This would be a great program for elementary, high school and college age groups because of the visual nature of the explanations.

I feel this program could really help people see the value of keeping an open mind.

O cupbearer of drunks,
O one who holds the hands of drunks,
Don’t ever forget
To be loyal and faithful to drunks.

O cupbearer of thirsty drunks,
The ones who worship wine are thirsty.

Turn the wine from hand to hand.
Don’t try to cheat and deceive.

Offer us the opportunity of Absence.
The ones who exist here
Are looking for non-existence.

Since our Kaiser is at Kayseri,
Don’t show us Babusistan.

Wherever there is wine, the assembly is there.
Wherever He is, a rose garden is there.

Give us a glass that resembles the sun.
Raise the sapling of the ones
Who have fallen from grace.

Believers deserve to see the beauty of God.
They don’t look at either Harezm or Dehistan.

The unbeliever stands to protect
The believer fro the evil eye
The same way he puts up a donkey’s head
As a scarecrow for the orchard.

If that beautiful is not in his heart,
He has certainly settled down in our hearts.

I will now share what Rumi’s words mean to me in hopes that it will share a perspective that may be helpful to others.

O cupbearer of drunks,
O one who holds the hands of drunks,
Don’t ever forget
To be loyal and faithful to drunks.

PC: God is the cupbearer. The term “drunks” is used by Rumi to mean both those that are spiritually drunk or intoxicated by Divine Presence and those that are physically drunk, as you would be from drinking alcohol.

Rumi often has double or “multiple” meanings in his poetry, leaving a morsel for almost anyone of any mind-set.

O cupbearer of thirsty drunks,
The ones who worship wine are thirsty.

Turn the wine from hand to hand.
Don’t try to cheat and deceive.

PC: Here I hear Rumi informing God that all who worship him (authentically) are thirsty for more; he doesn’t want a “momentary high”, he wants true Reunion.

Offer us the opportunity of Absence.
The ones who exist here
Are looking for non-existence.

PC: Here Rumi is telling God that he and his people aren’t “drunk on alcohol”, but are intoxicated in God-Realization; they don’t want more existence in or as this or that, they want, and are ready for non-existence – No-Mind.

Since our Kaiser is at Kayseri,
Don’t show us Babusistan.

PC: Rumi is saying, “Since our teacher is at Kayseri (a town), don’t show us another town!we aren’t interested in distractions.

Wherever there is wine, the assembly is there.
Wherever He is, a rose garden is there.

PC: Again, a double meaning. Wherever there is someone with a bottle of wine (a joint, or otherwise) there is an assembly there.

Rumi is also using “wine” to mean “love”; wherever there is love, there is an assembly there.

In the next line, he is saying that wherever “God is”, there is a rose garden there, which means that where there is “existence” (a rose garden), God must also be there (or there is no God).

Give us a glass that resembles the sun.
Raise the sapling of the ones
Who have fallen from grace.

With each such experience, the sapling of the ones who have fallen from grace is awakened, which is the process of enlightenment itself.

Believers deserve to see the beauty of God.
They don’t look at either Harezm or Dehistan.

PC: Believers deserve to experience the truth, they don’t need to look at more beautiful cities or places or “temples, churches, mosques, etc.”

The unbeliever stands to protect
The believer from the evil eye
The same way he puts up a donkey’s head
As a scarecrow for the orchard. 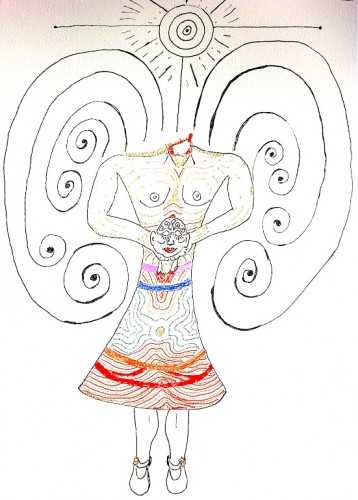 PC: Here is telling us that the so-called “religious people” think they are protecting the truly spiritual (or those with differing beliefs) that they deem as lost, infidels, sinners, etc.

Such people are best locked up or killed because they are as rotten apples (evil) that will spoil the barrel (of the rest of the confused religious righteous people).

They will kill you (in the name of God) and put your head up in the township so all can see the dangers of living outside the dictates of the book!

If that beautiful is not in his heart,
He has certainly settled down in our hearts.

PC: Here I feel Rumi is saying that if the experience of God isn’t authentically in a person’s heart (after they jail, torture or kill you and/or your family and friends!), God will certainly settle down in your heart as you go through the experience.

I believe that it’s truly an act of spirituality to love those that hurt you because you know within that all human beings are expressions of God.

As it says in the Bible, when Jesus was being crucified (having the donkey’s head cut off by the Romans to serve as a scarecrow in the garden), he said, “Forgive them Father, for they know not what they do!”

Always a good reminder to look past the action and see the underlying pain in others that motivates their behavior – forgiveness as an act of Love!!