ALL THINGS ARE CREATED BY OM

← THE CONFLICT CONNECTION PLAY YOUR WAY TO SPIRIT-SOUL! →

I hope you had a smooth, productive day yesterday.

I had a very full day. After writing yesterday’s blog, I got a nice lunge workout in. My body is responding well to training since I’ve had some rest at home. I had a productive day coaching clients as well.

Today I will have a meeting with Penny and our staff and I will be on a call to coach the Team Chek presenters and faculty as well. Tonight, I’ll be conducting a PPS coaching call at 6:00 PM PST for those of you PPS students that could use a reminder.

Many of you have stated in your BLOG comments here that you have lots of questions. Joining the PPS program gives you a weekly coaching call where you can ask all the questions about life you ever wanted, as well as learning from other people’s questions and of course my suggestions. You can read about the different memberships available to you on the PPS website.

For those of you that would like to have an up-close and personal day with me in my zen garden, this Friday I will get into some practical ways of growing, healing, and explore your creative expression.

Saturday, I will be facilitating my vitality-building workshop. In this workshop, I’ll take participants through a day in my life and share many ways I’ve been able to stay free of illness throughout my professional career. These methods are simple and effective, require no additional study and can be used immediately. I’ll also be sharing the methods I use for choosing my foods and proportions. We will have organic food catered by Chef Lance, who’s food is excellent as well!

Today, I’d like to share a beautiful poem by Kabir from the book, Songs of Kabir, translated by Rabindranth Tagore.

ALL THINGS ARE CREATED BY OM 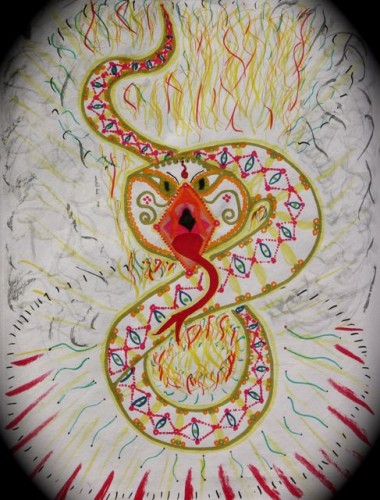 All things are created by OM

The love-form is His body.

He is without form, without quality, without decay:

Seek thou union with Him!

But that formless God takes a thousand
forms in the eyes of His Creatures:

He is pure and indestructible,

His form is infinite and fathomless,

He dances in rapture, and waves of
form arise from His dance.

The body and the mind cannot contain
themselves, when they are touched by His great joy.

He is immersed in all consciousness, all
joys, and all sorrows;

He has no beginning and no end:

He holds all within His bliss.

Kabir was a very evolved man. In the end of his life, those opposed to his multi-cultural, nondenominational teachings on God and life tried to kill him. They tried to drown him by chaining his hands and feet and throwing him into a raging river. He freed himself from the chains and swam out of the river. They captured him again.

Now frustrated with their inability to kill Kabir, they took him to a funeral pyre that was a-blaze like a raging inferno. Again, they threw Kabir into the burning fire pit. In moments, he walked away without a burn or scratch on him. At that point, they were convinced that He was a man of God. He was ordained a Saint and left alone until he died as an old man.

His only teaching, in essence, was to spend time coming to know God. Through the process of coming to know God, he taught and encouraged his students to demonstrate their knowing as action by example for others to emulate as they chose to.

For those of you that are interested, I’ll expand a bit on his poem here so you can explore my interpretation:

Kabir: All things are created by OM:

The love-form is His body.

PC: OM is the primordial sound that creates the Universe. It’s correlate would be tai-chi (yin meeting yang) or light meeting dark; everything meeting no-thing and no-thing be coming everything.

Kabir: He is without form, without quality, without decay:

Seek thou union with Him!

The way God sings creates the Universe; that is what GOD sings, and God is born, giving birth to a myriad of gods. Consciousness is the Diva of All things.

Kabir: But that formless God takes a thousand
forms in the eyes of His Creatures:

He is pure and indestructible,

His form is infinite and fathomless,

He dances in rapture, and waves of
form arise from His dance.

Just as you see trees move, but don’t see the wind, God’s wind is Spirit, and it creates, and animates all things. Yet, it is GOD Consciousness that holds all things together to create utility and functionality. The waves arising from His Dance and Rapture are the source of OM, and therefore, All that IS.

Kabir: The body and the mind cannot contain
themselves, when they are touched by His great joy.

PC: When one emerges in Consciousness, they are no longer “conscious of”.

As the ego let’s go of ideas, it embodies more and more of what “IS” until even the Universe disappears. This experience is first, one of expansion at the speed of light. Then, there is no “thing” to be illuminated.

As one experiences the All-Embracing Consciousness, the dissolving power of Unconditional Love is so deeply reassuring that even the ego can’t hold the reins.

I’ve found myself crying from the center of every cell of my being, while at the same time, laughing so fully that I thought I may turn inside out! One in this state learns that all pain is but a peeling, softening, chucking away of the illusions created by ego-minds.

All apparent successes we may achieve in life, become unworthy of even uttering in the Majesty of that which creates all pains and all joys, for all but God is temporary, like beautiful patterns created on a lake, drawn by the wind.

Kabir: He is immersed in all consciousness, all
joys, and all sorrows;

He has no beginning and no end:

He holds all within His bliss.

PC: There is nothing but GOD in the Universe. All that is tangible, measurable, are but waves on an Eternal Ocean of Consciousness. Only Consciousness can possibly be “conscious of”. Dreams change.

Enjoy seeing God dreaming everywhere all around you.

Know that when you see people in pain, that you are witnessing god waking up to God. How hard each coconut needs to be wacked to get to the juice and meat, in the end, turns out to be up to the coconut!