← AM I Conscious Enough? The Danger of The Crunch – Get More From Your Core! →

Today, I received a request to give my opinion about a forwarded link to Charles Poliquin’s post titled:

First of all, I have worked closely with Charles Poliquin in a number of ways.

In the period between 1996 to around 2002, I had a great friendship with Charles.  When Charles wrote for Muscle Media 2000, there were a number of times he asked for my help answering technical questions from readers and I supported him. He knows that.

When Charles had athletes with challenging injuries, he also consulted me, and he was successful applying what I shared with him in the process of helping such athletes.  Charles was relatively unknown in the US and being as intelligent as he is, and being my friend, I helped get his name out there.

In fact, I was a regular consultant for the Chicago Bulls in that time period, working directly with Al Vermeil and his team at the Bulls Training Center in Chicago, and at Charles request, encouraged Al Vermeil to consult with him. He did, and I was there with Charles when he shared some of his concepts with Al Vermeil. 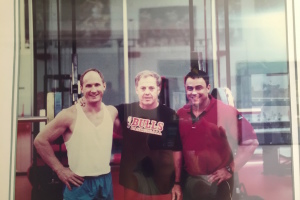 Above is the photo I have hanging in my office of us together at the Bulls Training Center.

When I developed my “Program Design” course, Charles was originally going to co-teach it with me; this was another means of me helping spread awareness of him outside the pure strength and conditioning circles.

When I developed the course, I used a number of articles written by Charles, not because I needed to (I had mountains of research from all over the world to back my teaching objectives and could have easily produced the course with no mention of his name), but because he was my friend and I was doing what friends do to support each other; I was happy to use his articles because:

A. They are good.

B. Because it allowed me to showcase his expertise, and

C. Because they were all publicly traded (published largely in the NSCA’s journals) and I used them in accordance with copyright law (as I always do).

Unfortunately, I got a phone call a day or two before the course was to run (and we had 85 people registered) informing me that Charles was in the hospital and had just had a heart attack! Naturally, I had to teach the course myself, which was certainly not a problem; again, I was trying to support Charles. Anyone that knows me is aware that I’m capable of teaching what I teach alone and have plenty of clinical experience to authentically back what I teach.

Charles also co-taught my first “Advanced Scientific Back Training” workshop in my first CHEK Institute location on Pearl St. in La Jolla Ca., so, rest assured, Charles wouldn’t have been co-teaching a course with numerous Swiss ball exercises if he didn’t believe in their application, or have experience with them.

Another little known fact is that it was actually Charles Poliquin who sent me the first two students for training in what was the basic training that became the CHEK Institute Advanced Training Programs. They, Yves Ethier and Paul Gonya (sorry if I spelled your last name incorrectly Paul), who were both strength coaches that worked for Charles. Yves Ethier continued to study with me for many years afterwards, and became one of my instructors, and is a very good friend of mine to this day. Charles sent these men to study with me to master the essentials of functional core conditioning and the basics of relevant orthopedic issues that require specific core conditioning modifications.

You have to know Charles to really understand him. He has a great sense of humor, and LOVES TO STIR SHIT UP anywhere and everywhere he goes. He’s much like OSHO in that way; where OSHO’s mission was to teach people to stop worshiping false Gods, and to learn what love is and practice living that way.

Charles’ motives, in my observation, are always calculated business moves; they are oriented around making people think that if they don’t do what he’s doing, and study with him, then what they are doing is stupid, and so are they!

This is technically referred to as a “negative motivation model,” a model that is oriented around fear-based motivation.

My personal model is the flip-side of that coin, which is “Dream motivated;” you tell a CHEK Practitioner or CHEK HLC Practitioner what your dream is, and they will use the optimal approach and methodology to get you prepared to live (balanced structure, diet, and essential lifestyle principles), and to live that dream.

As is usually the case with Charles, there are paradoxes in much that he says, and what people interpret based on their impression of what they feel he means. The whole anti-Swiss ball thread of his post/article I’m referring to here is just such a case. Pay attention to the title, “Circus Training and Entertrainment.”

Most athletes, coaches, therapists, and even people in general are all well aware that circus performers are highly respected as some of the very best athletes in the world; I have personally worked with several of them, including athletes from the Circue du Soleil and can assure you, they are extraordinary athletes that any athlete with common sense respects. Indeed, these athletes DO USE a wide variety of balls (medicine balls, Swiss balls, foam balls, wooden balls, balance boards, beams, and related apparatus) as well as a wide variety of other functional strength training methods.

Additionally, I’ve worked with more X-game competitors than I can list here, including Danny Way, Robbie Maddison, the Papass brothers and more…as well as a long list of extreme athletes. ALL of them have been rehabilitated and conditioned effectively with the use of Swiss balls and related equipment.

Now, in agreement with Charles’s position as stated in his post/article, the number of silly, dangerous and overly advanced exercises and methods being used with Swiss balls and balance apparatus today is a real concern. Sadly, some have blamed me for starting this trend. The truth is that many are terribly under-skilled, under-educated, and in any field of expertise, there are always fools in the crowd. There is no avoiding this reality.

In this light, if you look at each of the headings for which Charles bases his attack in his article/post, you could just as easily say that the very same issues arise with free weights, machines, and almost any apparatus in the gym or clinic today!

Anyone that has been trained at even the most basic level of my CHEK Institute Advanced Training Programs, starting with CHEK Exercise Coach and progressing all the way to CHEK Practitioner Level 4 (four solid years of in-depth training) has been schooled in the effective use of, and made aware of the abuses of Swiss balls and any such apparatus, for these issues are not only essential issues of safety, they are essential issues of effective program design.

Anyone trained by me who actually lives and practices what I teach would read this article by Charles and immediately see that Charles is making some realistic points, and would also clearly see Charles being Charles, like only Charles can do!

There have been times in my life when I let Charles get me wound up with all the anti-Chek comments he loves to make – Even though I probably encouraged more students to take his classes than most people because I believe there is something we can learn from anyone if we pay attention – but as a more mature man who is hip to the games Charles love to play to pull people into his camp, I choose to see the beauty of him.

Charles has helped a lot of athletes get bigger, faster, and stronger in his career, and anyone can learn something of value from him. Those that are adequately trained and have adequate knowledge and experience in rehabilitation and conditioning sciences and practices can easily see where Charles’ ideas are water tight, and where he’s performing his own circus stunts in the public arena.

Don’t forget, it is the people that today, call themselves Christians that yesterday, killed Jesus. All of life runs on polarities and only when we can rise above such polarized opinions are we ever able to see both sides of any issue, and truly become conscious.