I’m happy to share that I finished filming the 25 video series of lessons titled The Absolute Essentials Of Personal Training as of yesterday afternoon. Gary did an excellent job filming, Vidya kept me fed and on top of my tasks and our staff editor and technical wizard Darryl Isacs is doing his magic on the footage in prep for uploading on www.ptonthenet.com.

I feel a deep sense of peace knowing that if this were the last project I was to do in my career it would embody what I feel to be a true expression of my thoughts and feelings regarding what health and exercise professionals should focus on first in their personal and professional development. PT on the Net will release one lesson every two weeks starting fairly soon.

As you can imagine, I had to be very succinct in keeping each lesson to no more than ten minutes. My intention is to inspire health and exercise professionals to embrace the amazing opportunity to share their own personal development in the form of living leadership. I feel that the personal training industry has a real chance to be a healing force on the planet provided they can disengage from industry silliness — the same kind of silliness that has ruined the medical system, government, religion and many other potentially beautiful offerings and opportunities in the past.

Star People!
Today, I’d like to share a piece of art I created this weekend, and the story it contains, since it is about you. 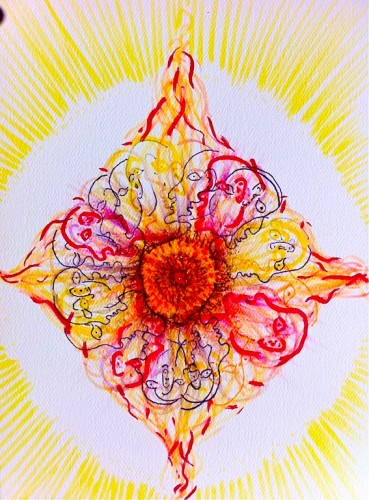 My drawing is of the sun. It is inspired by a comment that Alan Watts made in his most excellent book, which is titled The Book (highly recommended reading for anyone who wants to better understand life and the Universe!). In The Book, Alan Watts says, “the Universe is a peopling Universe.” Let’s explore this comment a little today.

UNCONDITIONAL LOVE (UCL) is a term that can be used interchangeably with THE ABSOLUTE.

An Absolute can have only two qualities:
1. It can’t be anything. This is because any “thing” can be measured and labeled as “this or that”. If an Absolute could be measured in any way, it wouldn’t be an absolute. It could be as big as big can be, yet, big is only big relative to something less big. Therefore, we can’t create an idea about The Absolute. We can only approach it by becoming utterly silent within – at which time, we disappear!
2. It must contain EVERYTHING for all things knowable or measurable are less than THE ABSOLUTE.
The only rational concept that approaches THE ABSOLUTE OR UCL is the numeral “ZERO”. Zero is the seed of All possibilities, for it is the origin of anything countable, including ideas. At the same time, ZERO is no thing. ZERO then, is paradoxically Absolutely Empty and Absolutely Full at the same time.

Current findings in astronomy have shown that stars each have a lifespan that is related to the size of the star (our sun is considered a medium range star in regard to size). Stars burn their core, which is mater that only burns under extreme pressure; stars are atomic furnaces in that sense. As a star ages, it expands. The materials that are expelled from the combustion process become gasses and particles that are expelled by the pressure of the perpetual explosions that make a star a star. Once the fuel source (mater) reaches a critical point, there isn’t enough pressure to expel the refuse and it collapses inward on the core of the star, resulting in a super nova. A super nova creates the largest explosion ever measured by astronomers; we can call this peak-yang expression.

The explosion is so great that a massive vacuum called a black hole is created. Black holes suck everything, “including light!” into them for potentially millions of miles around. This event we can call peak yin. The black hole pulls all the space debris into a center and compresses it with such great intensity that when its mass reaches a critical point, it explodes again. This explosion represents the birth of a new star. The birth of a new star is sometimes referred to as a white hole.

Because this process has been found to be evident everywhere in the Universe, it casts doubt on the concept of any Big Bang beginning to the Universe. Current evidence suggest that the Universe is a continuous bang process. What we once thought was the beginning is likely to be an expression of a larger process at universal scales. There are now several good multiverse theories.

Peopling
The concept of a peopling Universe could be easily misunderstood to only include human beings as the “people”. In my opinion, that would be a mistake akin to thinking that God looks like a human. The Universe obviously enjoys being conscious of itself. Research in biology has shown that a significant number of animal species are both aware of sunrise and sun set, and many will stop at those times and become present with the sun. Franz de Waal, a famous primatologist describes how chimps will sit and enjoy the sunset just like humans do.

It appears that deep inside all living beings, there is an underlying consciousness of the mystery and majesty of life. There seems to be a deep knowing that life depends on the sun.

When we consider that all living beings have bodies made of atoms that originated in the sun, and that the atoms in the sun have been in a myriad of other suns, it is hard to say that we are essentially earth people. When you consider that an atom is 99.999!.percent empty space and that they radiate light, you can get to the basic construction of all things and beings. We are a combination of matter, space and light.

Some of you have seen the images I’ve shared of the etheric energy field emitted by the sun and can see the archetypal patterns in the images. They often look much like single cells look. We are a combination of about 100 trillion such cells.

Photons are bosons, which quantum physicists say are identical everywhere in the universe. They are essentially empty of self. If you consider that matter is the source of the light just as you need a fuel source for any fire (light), you can then take the next step into a logical explanation of how a star peoples. If you think of the matter in a star as not only fuel, but as the seed of information another perspective arises.

The word “information” actually means in-formation. Matter, being yin relative to light, is under the law of gravity. Gravity then, in-forms, or folds matter into the primordial archetype of a sphere. The sphere essentially has no beginning and no end but can change size just as a star does.

If you study sacred geometry, you can learn of the myriad of possible shapes or forms that can be created as expressions of a sphere. The extreme yang condition of the atomic fire of the star un-folds form.

The light of the star carries the images and information that creates the same basic effect that a sperm has on an egg. The meeting of the sperm and egg creates ignition of life. The egg (matter or the center of a star) carries the materials to begin building the first cell, while the light carries the energy an information that unfolds it’s potential by warming and creating movement; remember, movement is life.

This means then, that matter is the seed that creates body, and fire/light create movement. Together, they create mind. Matter is that which ZERO is full of, while light is that which is empty of (body). This elementary relationship is the very source of movement, time, mind, thought, body and therefore, experience.

It would appear from observation of life as we know it, that all life is conscious of life and what is essential for survival. Each life form is aware of its universe. As beings become larger and more complex, they also become aware of a larger and larger universe. Since all perceptible universes are aspects and expressions of The Universe (which means “One Song”) it would appear that the word “peopling” is but an expression of being conscious or “aware” of what is occurring in the universe.

How To Use This Realization In Your Life

The two greatest fears people have are:
1. Fear of death, and
2. Fear of public speaking! (funny!)

When we realize that The Universe has nothing to look at and enjoy but itself, and that life on earth is an expression of the life in our star (sun), which is an expression of uncountable other suns, the whole concept of death as an ending looses logical construct. It appears to me that consciousness (the reconciliation of ZERO Empty relative to ZERO FULL = NO-THING) creates the illusion of time so that it can experience itself. It also seems to have an inexhaustible imagination since the universe is never the same from moment to moment, and neither are you!

There is nothing to be afraid of.

God is UNCONDITIONAL LOVE and seems to have an unlimited willingness to create, experience and enjoy.

Since UCL is the highest truth of you, and all creation, the very worst thing that can happen at death is that you can choose to become GOD and loose your ego-identity as this or that person. If you would prefer to be a mountain, a star, or a Diva, why not?

God has nothing else to do but you! Enjoy the show.