I had a busy day yesterday as usual!

I only had 20 minutes to get a work out in so I did a circuit of 24 lunges followed by 10-12 squats with 135, followed by Reverse Swiss Ball Crunches for 10 reps, which I did three times. I was a ball of sweat and panting like a plow horse, but it felt good to sweat a bunch!

My friend and student Marisol Penner forwarded this link to a recent NY Times article looking into the research on organic vs. conventional meats and produce.

Here is the link to the article so you can read it:
https://www.nytimes.com/2012/09/04/science/earth/study-questions-advantages-of-organic-meat-and-produce.html

THIS ARTICLE IS FULL OF THE TYPICAL BS, and has a little truth scattered in there.

I have addressed every one of the issues they bring up as negatives regarding organic foods in my book, Under The Veil Of Deception – What Uncle Sam Isn’t Telling You About Organic Food and Farming.

This book is a prerequisite for my HLC 2 students, but you can order it through the CHEK Institute if you are interested in a comprehensive, but shocking read!

As you read the article, please consider these key points:

1. The chart below was forward to me by a professor of agriculture several years ago. It beautifully highlights the very reason you are reading such BS in the NY Times!

The first thing you should know about any organic certifier is that any legitimate organic certification body (The Demeter Association is the Gold Standard by the way!) is that:

A. There is typically a two-year gestation period where the farmers soils must first be tested for chemical residues that are illegal for organic farmers to have in their soils. They are often given information that will help them balance their soils as well.

B. During the gestation period, the microorganisms clean up the soil, but the research shows that during that period, there can be new chemical formed in the process that may be as dangerous as the ones being cleared.

C. Farmers are generally allowed to sell their food, but it can’t be labeled as “certified organic” until they complete the gestation period and their soils have been retested and cleared as healthy.

D. Most legitimate organic certifications charge a fee ranging from $3-6,000 for the certification and the process outlined above.

Therefore, one simple way to determine the value of any organic certification is to call them and pretend to be a farmer wanting to be certified by their organization. Ask them what it costs and what criteria there are to be met?

If you only have to pay a fee and there is no soil testing or gestation period required, it is bogus!

Unfortunately, most of the research sited against organic foods in articles like this is being done at universities that have financial ties to the big food corps that create bogus certifications under different corporate names so you don’t make the connection; see the chart below! 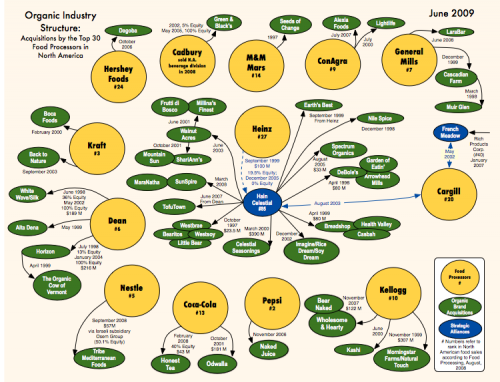 Here is the real deal here: The large conglomerates DO NOT want organic food and farming to become popular. It is much more labor intensive, requires skilled help to produce, and would put an end to a very large, successful, financial giant!the farming chemical industry!

The reason there is so much bogus research out there, including what you see in the NY Times article, is that the “fake organic certifiers” also have many ties in the University agricultural programs; they often fund them!

Here’s the problem: They take organic food that isn’t really organic food, that is grown on the soils owned by the same corps that often have large commercial farms as well to the university labs for testing.

They test it against their “commercial foods” often grown on the same soils.

They then produce so-called “research” and publish articles like the one I’m referring to here to try and use the social credibility of “science” to sell you on the concept that organic food is no better so you will support the commercial farming industry with your food money!

They are comparing oranges (commercial) to oranges (fake organic) and trying to convince you that there is no difference.

Well, they are right. THERE IS NO DIFFERENCE in such cases.

The British Soil Association published a paper several years ago looking at the organic research because of the kind of concerns I’m voicing here.

They got a panel of scientist together and reviewed 128 papers comparing organic to commercial foods. The object of the meeting was to determine if the study designs were valid as scientific research.

Of the 128 papers evaluated, they found that only 28 (if I remember correctly) were scientifically valid with regard to how the study was designed.

Every one of the properly designed research studies showed significant benefits for eating organic foods.

The EPA’s standard for safe tolerance for pesticides is also dangerously misleading. As I show in my book on organic food and farming (sited above), there is now a number of good research papers showing that low level pesticide exposure is potentially MORE DANGEROUS than the low levels sited by organizations such as the EPA.

The research shows that when pesticides are at low levels (Below EPA standards), the immune system of our bodies doesn’t recognize them and they can cause injuries to our DNA.

I call this the homeo-pathologic effect. Homeopathic medicines are well known to be very powerful even at dilutions so dilute that there is not a single molecule of the original medicine from which they were made. This is the territory of energy medicine.

FARMING PRACTICES
Commercial farming is very dangerous to the environment. Many research studies have highlighted the fact that commercial farms are extremely toxic to the environments they are in. They often poison ground water for large distances due to all the urine and feces that runs off into the soil, not to mention all the farming chemicals and drugs used in the animals.

Commercial farming has been shown to be as much as 25% responsible for the green house effect due to excessive soil tilling and machine use. This is the opposite with real organic farming, which serves to balance and stabilize the environment.

I could go on for hours but my book covers plenty and will probably shock you to your core when you actually see what’s going on under your nose!

To maximize your potential you must feed the body high quality, organic and as little processed food as possible. There is no argument there!

If you have not read my book, How To Eat Move and Be Healthy! for practical applications that I teach and live by, I highly recommend that you do. 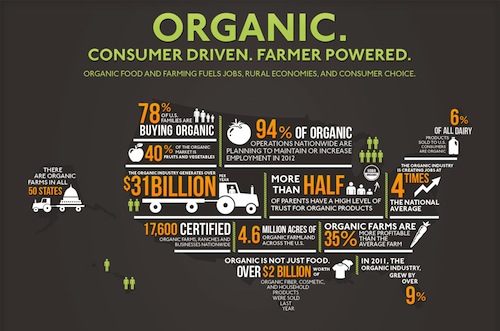 There’s no sense worrying about who the next president is. They are all puppets. Your best bet is to use your money to vote.

After all, we don’t have a “White House”, we have a “Corporate Headquarters”, and that’s it! It’s all about keeping the filthy rich, filthy richer!

If you don’t buy the crap that’s poisoning people and killing the planet, they can’t afford to manufacture it. This is the very reason you keep seeing BS articles like the one I’ve sited here.