I hope you are all happy and well.

I’ve been enjoying a couple days off after teaching HLC 3. 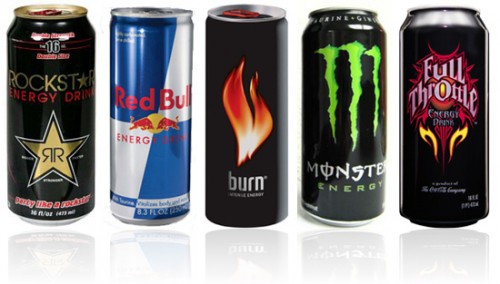 Over the weekend, I got an email from a friend of mine who is an FDA agent. He’s heard me lecture about my concerns over energy drinks in the past. He informed me of the FDA’s growing concern over energy drinks and the real problems they’ve been creating for people.

Here is his forwarded NBC news report below:

Analysis: Caffeine Levels On Energy Drink Labeling Often Inaccurate. NBC Nightly News (10/25, story 6, 2:15, Williams, 8.37M) reported, “There’s something a lot of people buy in the news tonight. ‘Consumer Reports’ is out with a new investigation on how much caffeine they put in energy drinks.”

NBC (Costello) added, “‘Consumer Reports’ has tested 27 products and found that five of the cans that list caffeine actually had caffeine levels at least 20% higher than what their labels indicated; and 11 of the products don’t specify their caffeine levels at all. … Among those drinks that don’t list the caffeine levels, Monster.”

Reuters (10/25, Geller) notes that the Food and Drug Administration reports linking Monster Energy Drinks to one non-fatal heart attack and five deaths, a lawsuit against the company by the family of a 14-year-old girl who died after consuming two Monster Energy drinks, and now, the Consumer Reports analysis, have prompted calls for stronger regulation on highly caffeinated beverages. Reuters says those calling for reform in the way such drinks are regulated and marketed include several US senators and the New York Attorney General. NBC News (10/26) also covers the Consumer Reports data on its website.

It is very important to realize that:

1. These drinks are essentially garbage that shouldn’t be in a human body!

2. Due to labeling laws in most countries being constructed to favor manufactures, not consumers, there are many chemicals and drugs or substances with drug-like effects that aren’t listed on labels.

These can, and often do cause significant negative symptoms. I’ve had to work with many who were suffering anxiety attacks and symptoms of sympathetic nervous system overload from drinking them.

3. They stimulate adrenaline and cortisol production, exciting the sympathetic (fight/flight/freeze nervous system). If used with any regularity, the result is commonly adrenal gland exhaustion.

This leads to an inability to produce sex/growth or “anabolic” hormones effectively. The result is that the user’s body can’t heal optimally, which is a real problem for athletes.

As the bodies ability to produce cortisol (stress hormones in general) diminishes, there is a general sense of fatigue and/or malaise that emerges. To combat the chronic fatigue created, most people increase their intake of sugar and other stimulants.

This leads to progressive malnutrition and imbalances in the pH levels of the body, making it too acid in general.

To counterbalance this, the breathing rate of the individual tends to speed up. As breathing speeds up, too much CO2 is out-gassed. This becomes a problem because CO2 is a natural stimulant of the smooth muscles of the digestive and eliminative organs and when not in adequate concentrations, constipation and digestive trouble emerge.

If you put all this together in one package, it can translate to lots of body troubles, body shape challenges, mental-emotional imbalances, and often results in a wide variety of drugs being prescribed by physicians to counterbalance what could easily be fixed by being more wise with one’s choices.

4. Once the adrenals reach a point of exhaustion where normal physiological function is being threatened, there is typically a down-regulation of the thyroid gland to slow metabolism.

This is so the body has more time to clear toxins and catch up on cellular repair. I feel it is also a defense mechanism generated by the body to create an environment where the individual doesn’t have the energy to participate in activities that will further drain resources.

With hypothyroidism comes a drop in body temperature; people tend to feel cold even when others are not.

There is also an accumulation of fat around the belly, hips, chest and triceps, which is much more prominent in females than males in most cases.

5. Sexual performance diminishes. Once the body can’t generate enough resources to produce stress hormones (Cortisol is a primary hormonen and you will die if its levels drop too low!), it shuts down sex hormone production to conserve resources.

Sadly, I’ve now had several men in their late teens and early 20’s contact me asking how to get off of Viagra! When our young men need Viagra, it’s a serious sign that they are lost and confused with regard to how to live, eat, and care for themselves.

It’s also a serious sign that our medical system and governments are functionally useless and that we have no government at all. We simply have “Corporate Headquarters” disguised as government!

6. The likelihood of a variety of serious disease states such as cancer increase! As the changes outlined above emerge, the bodies immune system becomes disabled.

This opens the door wide to finding your own genetic weaknesses, and your favorite hospital to make unwanted donations to!

I suggest sticking to the diet and lifestyle plans I’ve laid out in my books, How To Eat, Move and Be Healthy!, and The Last 4 Doctors You’ll Ever Need – How To Get Healthy Now!

My suggestion is that instead of toxic, garbage energy drinks (promoted by many athletes that get paid by these companies but often don’t even drink them because they create so many problems) is:

A. Begin your day with the coldest shower your tap will offer! Stay in the water three to six minutes and don’t use any hot water.

The more stressed your adrenals, the more showers a day you will generally benefit from. I have healthy adrenals and I often take as many as three cold showers daily to aid my recovery from exercise and stress in general.

Cold showers and 30 minutes of tai-chi before sex is a far better solution than pills and other gimmicks!

B. Buy a good slow speed juicer and juice a variety of fresh fruits and vegetables to start your day and have on breaks. I use the “Omega Juicer vrt350 ” and it’s excellent!

There are many great juicing books available on Amazon.com and you can find many juicing experts on the web, such as Troy Casey, The Certified Health Nut, and the Raw Brahs.

C. Practice tai-chi, or some form of movement timed with the breath cycle. My book, How To Eat, Move and Be Healthy! has a variety of “Zone Exercises”, which are my “Work-In” exercises to balance the body and help your adrenals heal.

I also offer 7 different “active meditation” techniques in my 4 Doctors audio companion titled, “Dr. Quiet”, which is available at www.ppssuccess.com

I have had to rehabilitate many athletes and bodybuilders who’ve abused themselves using stimulant drinks and it can take up to two long years to balance the body again.

There is also a real shortage of health and medical professionals that know how to do this naturally.

If you feel you have the symptoms above and need help, I suggest contacting any Chek HLC 2 or HLC 3 Institute Trained Professional for help. You can find one near you by visiting www.chekconnect.com.

Yesterday, I was feeling great after a day of rest and a good long steam and toning session with Donal Carr and Cam Nell the day before.

I began my training session with walking clubbell lunges to excite my nervous system and get the juices flowing. 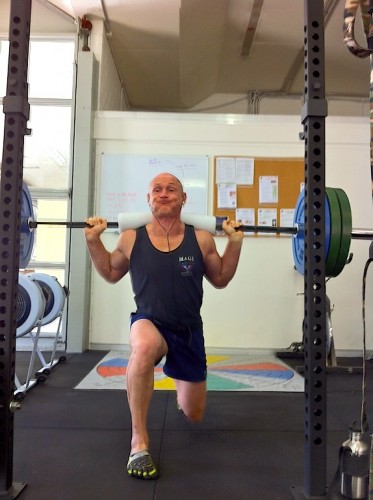 After my lunge training was done, I got into some squatting and come core work.

Here you can see me doing a cable flexion with lunge and twist combined. 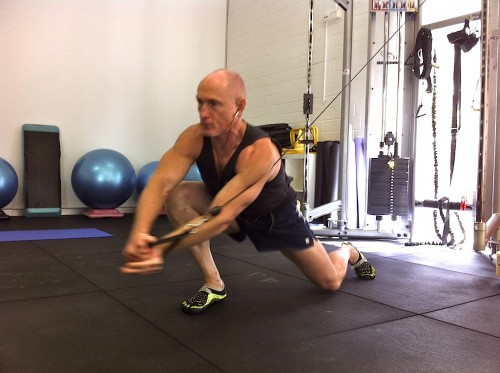 I did three sets of squats with cable pulling.

Between sets, I created some art on the white board to balance my left and right brain. 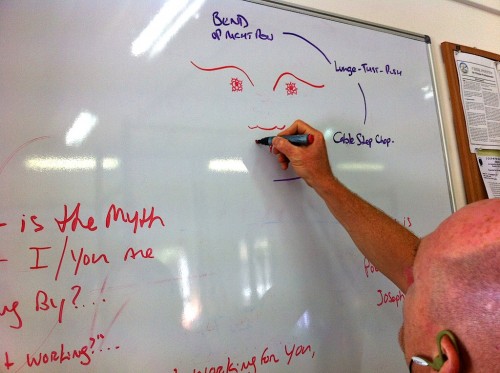 This helps keep me in a meditative state while exercising.

We all have choices and my hope is that you will keep making the ones that are most optimal for your body-mind and spirit.

Tomorrow we have the CHEK Professional Dinner through Place of Chi. I am really looking forward to that and have started to organize my art to share during the art show!

Have a great day!
Love and chi,
Paul Chek