THE SUN IS SHINING BRIGHTLY IN LONDON!

My day started early today as I prepared myself to head to the Manchester airport to fly to London. Gavin picked me up early so I’d have time at the airport to deal with any overweight baggage issues and to beat the traffic. We were successful on both accounts.

I had a great time visiting Gavin and Gabi at CHEK Europe and we put on some great workshops together, as I’ve shared in previous blogs.

I had an enjoyable flight on British Airways and Matthew Wallden was waiting patiently for me when I arrived in London. My flight was late due to some sort of runway check, but fortunately, London was my last stop so it didn’t matter much.

Matthew drove me to his warehouse for his 5 Fingers UK business. He had just received a large shipment of 5 Fingers shoes so the exercise area was covered with boxes. 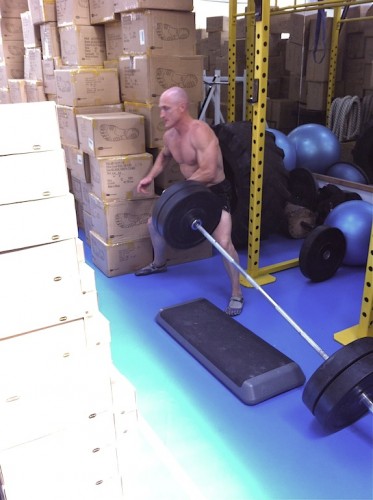 We moved the boxes away so I could get into a good deadlifting and Single Arm Olympic Bar Pulling session. I don’t know how many sets I did.

I was just enjoying not having any appointments to get to and I just kept pulling sets until I started to get sore. Awesome!

While I was training, the famous Barefoot Ted from the book (and audio book) Born To Run arrived.

To be honest, I was pretty surprised when I actually met Barefoot Ted McDonald. As you can see in the photo, this guy could be my brother! We use the same barber, are the same height and about the same weight too. 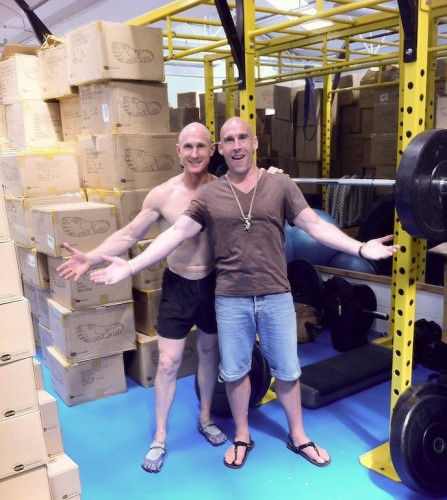 Having listened to the book, Born To Run, I knew that Ted was into philosophy and the spiritual traditions of the world. Ted and I spent a couple hours or so discussing our living philosophies.

It is very cool to meet a man who’s life path has led him to many of the same feelings and conclusions about life that my path has led me to.

Matthew took Ted and I to lunch and we all had a great time discussing many issues, but we couldn’t help but discuss issues of nutrition. We were all noticing how even though the food we had ordered was “nice looking”, the salad in particular was “empty.”

While we were sitting near the window of the restaurant, there were many obese and unhealthy people sitting outside eating and walking by. We all agreed that it is truly a MARVEL that the human body can literally run on poison, junk food, polluted water, air (and chronic negative thinking) for as long as it does.

We had a great time visiting and talking about all aspects of work and life, including how demanding it is to own your own business!

Ted and Matt were telling me that last time Matt and Ted visited the place we were eating lunch, almost all the businesses in the little shopping mall there had gone out of business!

The economy here has been hit pretty hard in England in the past couple years, but Matthew said that things seem to be improving in the area based on the number of shops that are now open.

Matthew brought me to my hotel. I was a little worried because I’ve had my share of experiences with little English hotels with bars in them! The rooms are usually tiny, the food terrible, and the bathrooms a combination of both!

I was grateful that Matthew did his homework on this one. 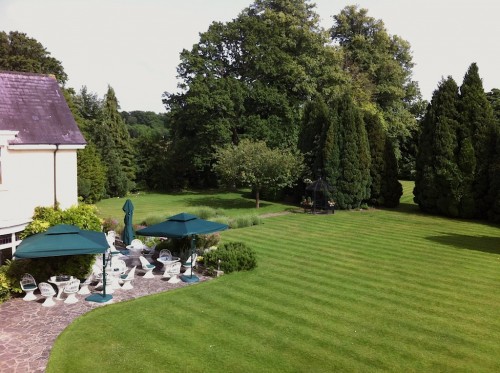 As you can see by the photos that were taken out the window of my room, there is a nice big garden area behind the hotel. 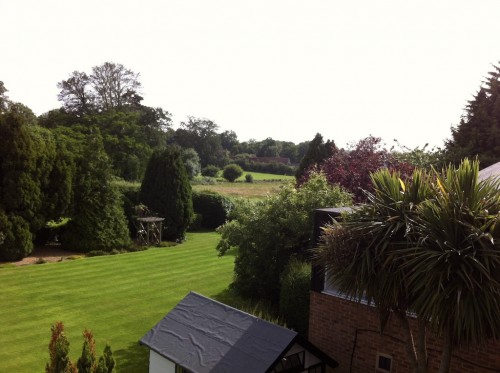 I tested it out this afternoon while having a lovely (and much needed) nap in the sun. After my nap, I enjoyed a nice tai-chi session out with the garden spirits too.

Tomorrow morning, Matt will pick me up and we’ll head to his office for another workout before we meet the media for a couple of interviews.

Then I’ll sharpen up my presentation for the Barefoot conference Saturday. I’ve only got 30 minutes, so I’ll have to be super-tuned.

I’ll be showing my audience how infant development is essential to optimal core and musculoskeletal function.

I’ll highlight that the reason so many people are having problems putting on minimalistic shoes is that they have a combination problem.

A. Most people today did not have normal or optimal infant development, and

B. The grand majority of people are eating so many inflammatory agents; their cores are being perpetually shut down by organ reflexes that are designed to help create more room for swollen organs and aid improved blood flow as a healing response.

When anyone with one or both of these issues dons a pair of 5 Fingers or minimalist shoes, they have to deal with significant ground reaction forces and without any support, fall into pronation (moving toward flat feet).

The body can deal with this sort of stress in small doses, but once people start trying to exercise without addressing causative factors, things simply get worse and injury is common.

I’m overjoyed at the thought that I get to fly home Sunday and soon will have bare feet in my own garden!

I hope you are all enjoying your day!