I hope you are feeling vital and loving today!

As many of you are aware, my body and soul directed me to progressively change my diet a couple years ago. I progressively ate less and less flesh food until I was a vegetarian.

Naturally, everywhere I go, people want to know what I’m doing, including everything from what I eat, read, do in the gym, to who I have sex with and how I wipe my ass. That’s human nature.

When the word got out that I was eating as a vegetarian, many people had a barrage of nasty commentary that ended up in my lap, or being handed off to my staff at the institute when talking on the phone.

Some thought it was funny and made light of the situation, such as the friend that gave me the shirt you see me wearing here. 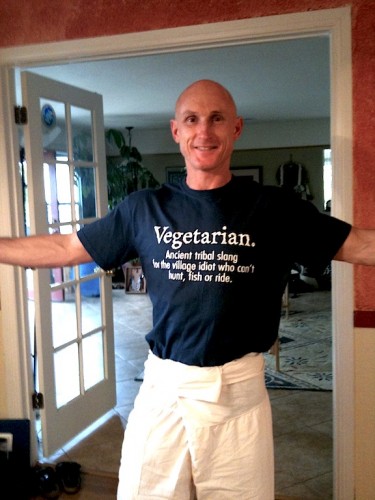 In case you can’t read it, the shirt says:
Vegetarian
Ancient tribal slang
for the village idiot who can’t
Hunt, fish or ride.

I love the shirt and found great joy in wearing it. Particularly when around people that know me because they know just how untrue that is in my regard.

After almost exactly a year to the day, my soul told me that I should begin eating fish.

I had accomplished the inner cleansing and spiritual development I needed that required the diet shift I’d participated in.

I feel fantastic too! I also felt fantastic eating as a vegetarian simply because that is what my body and mind needed.

As I’ve always said in my many lectures around the world, there are very few people that can sustain optimal health as a vegetarian, yet there are a few.

I’ve often quoted both Rudolf Steiner and Paramahansa Yogananda who both said, no one should become a vegetarian until it happens naturally.

I have always practiced and taught the importance of understanding that your body must change to meet the demands of the environment, be that physical, emotional, mental or any combination thereof.

I have always taught my students to look carefully as the symptoms of excessive carbohydrate, fat or protein consumption and adjust accordingly, regardless of what some diet book may say. I’ve clearly outlined the indicators of correct, balanced eating in my book, How To Eat, Move and Be Healthy!

A. Take responsibility for your own needs.

B. Be brave enough to be different than other people and not just do what everyone else is doing so you can fit in.

C. Believe in the experiences you are having more than you believe in books or what other so-called “experts” tell you!

THE TRUTH OF THE MATTER!

There is no such thing as a vegetarian!

Sorry folks. That is fact.

If you read my book, Under The Veil Of Deception – What Uncle Sam Isn’t Telling You About Organic Food and Organic Farming (which is currently only available through the C.H.E.K Institute), you will find some very important research in this regard.

All the way back in the late 30’s and early 40’s, the famous pioneering organic farmer Lady Eve Balfour and founding member of the British Soil Association was doing important soil research.

In her book, The Living Soil (which is now available in paperback after being out of print for many years), Balfour showed that the soil mycorhyza (soil fungi) had essential relationships with plants.

She showed that the soil fungi liquefied minerals and fed them to the plants they had relationships with in trade for plant sap, which is rich in sugars – their food of choice.

But, what’s more important to understand for those of you with incomplete or dogmatic views of vegetarianism, including vegetarians(!), is that she showed that the mycorrhyza fungi cast filament nets in loops around the plants they shared a functional relationship with for the explicit purpose of capturing, killing, and eating any predatory parasite that wanted to eat their plants.

What do the soil fungi do once they kill and eat these little ANIMALS? Ah, yes, well, first and foremost, just like pretty much every carnivore in the wild, as you can see in this image below from her original publication, they eat their organs first and feed them to the plants they get sugar from! 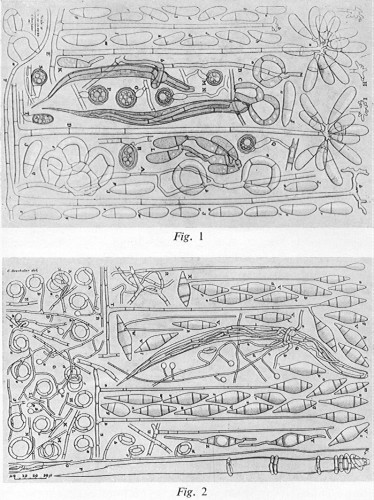 Now, some of you may be mumbling under your breath saying something like, “but that doesn’t happen very often!”!but it does.

Current research by Elaine Ingham, a highly respected soil researcher shows that about 85% of all plants are mycorrhyza formers.

That means that the grand majority of the plants a vegetarian eats are sustaining themselves off a diet that includes animals!

So, it turns out then, that if the animals are small enough that the vegetarians don’t see them, they are comfortable pretending that they aren’t participating in the killing of animals.

The truth is that eating animals is an essential part of nature. There’s not much out there that isn’t eating its neighbors!

Additionally, Sir Albert Howard (still considered by many to have been the more highly regarded agriculturalist and author of An Agricultural Testament) did extensive studies with composting.

Though it’s been years since I read the book, I’ll paraphrase the key message of his composting research. Sir Albert Howard created the following types of compost:

B. With hair and some dribbles of blood, and

C. With table scraps including meat.

He then grew acres of plants, sectioning out areas specifically for the plants that were fed each type of compost.

When it was time to run his test, he unleashed huge amounts of parasites on each group of plants.

What did he find??

So, what can we all take home from this lesson?

1. Everything alive has an optimal diet and deviating from that diet decreases health and increases your risk of weakened immunity and parasite infection.

2. That plants, at large, are carnivores. And like most human beings, they don’t do the killing themselves. They trade sugar for meat and we trade money for meat.

3. That any deviation from an optimal diet, regardless of what some expert or book is telling you is highly likely to decrease vitality and increase your chances of physical, emotional, mental and spiritual illness, leading to disease.

4. Before making judgments about how others choose to live, it is wise to educate yourself first! Remember, opinions are like ass-holes, everyone has one!