Today, I’d like to share a little of my knowledge of the process of how the soul matures into Self-Realization. 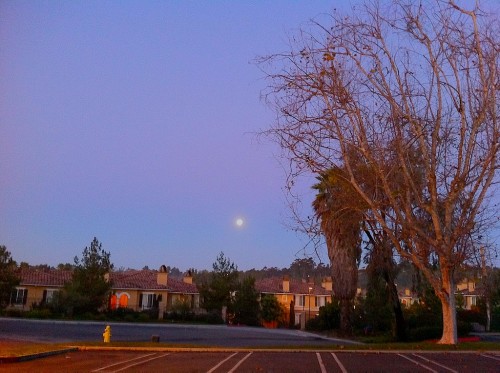 Here, you see a photo Vidya took of the moon setting in front of my office this morning. The soul itself looks much like the full moon. It is a luminous sphere of light, in which the story of both your lives and the life of the Universe is contained; light has an infinite capacity to carry information ~ just as the soul has.

Though this may be confusing to some, consider how a homeopathic medicine is made. One takes a drop of any medicine and adds it to a specific volume of water, caps it, and succusses it; this means that the water with the drop of medicine is tapped vigorously against a solid surface, like wood or stone, imprinting the vibration of the medicine into the water molecules. Then, a drop of that mixture may be added again to a specific volume of water and the process is repeated. Research shows that each time this process is conducted, the homeopathic medicine becomes stronger, yet, there is less and less of the actual medicine present in the mix. This process can be continued until there are no detectable molecules of the original medicine there! The water carries the vibration-signature of the original medicine, which becomes more potent with each successive succussion ~ just like the Soul!

A soul is formed whenever there is an inside and an outside to any structure, beginning with a single atom. If God is Unconditional Love, one may see space as an exemplification of Unconditional Love, for space is All Present, All Pervading, All Allowing, and even if every atom of the Universe was gone, space would still be there. The only difference between the space in you, and the space in me is what’s inside you and inside me. An atom, which is both a particle and wave reality, is the first stage in the development of a holon, which is a whole part; anything which can exist unto itself, yet is part of a larger whole is a “holon”. Current investigations in Quantum physics show that there is tremendous intelligence in any atom.

To gain more clarity on how an atom has an inside and an outside, consider that the atom’s electron is spinning at near light-speed (atoms are light entangled). It is because of this high-speed rotation or “vibration” that objects are experienced as relatively solid. To clarify this, think of an airplanes propeller. If the engine is not running, you can see the blades of the prop and you can stick your arm between them without any risk of injury. Yet, once the engine is running and the prop is rotating at thousands of revolutions per minute, what you see is more like a wall of motion and any attempt to stick your arm between the blades of the prop would be catastrophic. Therefore, one may say that an atom, like a propeller (which is both solid (particle composition and wave like) has an inside (you can’t stick your hand in there) and an outside (you can stick your hand there).

With that in mind, consider that prior to the formation of atoms, there was no inside or outside to space, and therefore, no individuation, nor differentiation possible – there is just space. Once there is an inside and an outside to any thing, it is en-souled. 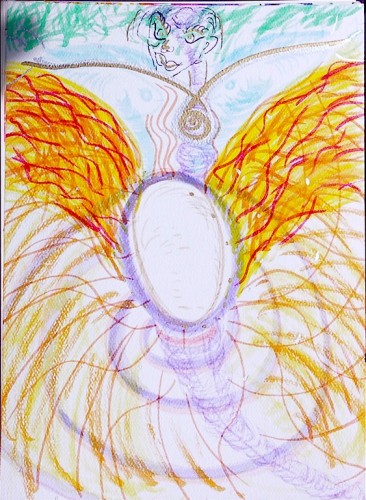 Ensoulment is depicted in my drawing above as the egg, which represents body or embodiment. Nature is the process of ensoulment. All things in nature are ensouled, or embodied. There is no place in nature where there isn’t space (Unconditional Love), and there is no thing in nature that doesn’t have an inside and an outside. On earth, the environment is optimal for the creation of biological life, which is the process by which self-awareness emerges progressively as atoms form molecules, which then form cells, which then become organs and organisms.

Just as a caterpillar progressively matures to become a self-aware butterfly, we have all gone from being atoms in stars, to atoms on planet earth, and progressively become more complex, and more conscious. As Rudolf Steiner pointed out in his teachings, it can be seen that with progressively more membranes, any living creature becomes progressively more conscious. This is because each membrane acts like a drum skin, which vibrates within a given frequency; the vibration from each membrane results in progressively more complex vibration patterns as membranes interact with each other, which is no different than what happens when you add additional members to a band; they produce more and more complex patterns of vibration. Your DNA carries the entire history of your biological evolution, each step representing an increase in self-consciousness and a greater capacity for intelligence; the ability to create and to love.

When one understands this process, then religion is born with reverence for life on earth! Without life on earth as we know it, we would not be conscious enough to worship life! Therefore, one may say that there is a direct correlation between one’s spiritual development and their willingness to nurture life, for without it, we could not be who and what we are at this moment.

It is my dream that we all come to love and respect the magnificent process by which we can choose to become self-aware. Once one reaches the point that they are aware of their thoughts and actions, they at once become aware that they have the choice to kill, or to support life. Just as a caterpillar becomes aware that it can fly, we too become aware that we can fly because the mind can’t exist without space for the same reason that a homeopathic medicine can’t exist without water or a carrier fluid.

The process is called “Self-Realization”; the capitol “S” represents the soul, which becomes consciously aware that the space within – is the space outside itself, and that separation is an illusion – a necessary illusion that allows space to become self-aware just as an egg is essential for the growth and development of a bird, which can’t effectively be hatched until it reaches optimal growth and development to survive in the environment outside it’s egg shell. This is no different for the Human Soul.

Hopefully, with this brief explanation, you may be willing to join me in worshiping life, for all living beings are God becoming self-aware so that God can ultimately become Self-Aware.

The process that I have described here is necessary so that just as a baby bird can reach a level of maturity (under Mother’s guidance) that it can learn to fly – to experience and enjoy a vastly expanded territory of space, we too must become aware of how to manage ourselves within the cocoon created by Mother Earth.

Once we grow in spiritual intelligence, our intuition opens and we gain access to more and more of the universe. We begin to meet souls that have evolved – hatched from the cocoon we refer to as a “body” and who have taken flight to explore the grandeur of the Universe.

Paradoxically, we can’t truly enjoy our freedom if we have been destructive to the Earth Cocoon, for with our growing awareness of possibility, we realize that there is great joy in sharing this amazing experience with other souls and that the Earth is the “hatching ground” for souls. To be destructive to the earth would be akin to bombing maternity wards! To the degree that we have been destructive and knew we were doing it, out of our own love, we keep coming back to Earth to try and create a safe environment for all the baby-souls to safely hatch and grow.

Together, we come back to nurture God.