MY MOM IN THE NEWS

Welcome to your Monday,

I hope the Thanks Giving weekend was a pleasure for your all.

I had a nice filming session on ThanksGiving morning while it was quiet around the institute.

My friend Sean Greeley, owner of Net Profit Explosion came in to visit me and work with Penny, Vidya and I on ways to improve our business systems and functions at the institute.

Sean’s been very successful at helping people with exercise or health care related business have net profit explosions, so I couldn’t resist the opportunity to acquire his wisdom.

Sean just arrived from Australia Thursday morning so after meeting, we fed him and gave him some much needed rest.

Friday, he and I spent the day relaxing together, doing art, and hiking in the hills. Of course we enjoyed Penny and Vidya’s great food as well!

Saturday morning, my sister Barbara and her husband, Randy came to visit me. 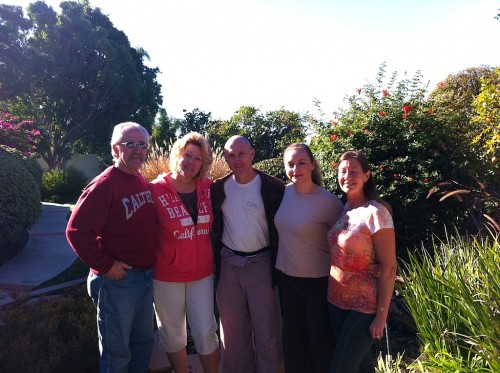 I don’t’ get to see her often so it’s always nice to see her and Randy.

It was fun because she brought up all sorts of stories from our childhood, some of which I’d forgotten about. One of the stories she recalled was our disdain for picking rocks out of fields for hours on end.

She thought it was funny that we both hated working with stones on the farm, but now we both love stones.

After breakfast, Sean and I went to Encinitas for a massage and steam.

He had Frankie as his masseuse and he was really blown away at how great a massage she can give. He’d never tried Tai style massage and he really enjoyed it.

I visited my trusty bone scratcher, Wes Boyce. He gave me my usual super-tune. We finished our day discussing business issues.

Sunday morning, I took Sean out into the rock garden. He wanted to get into my gym and work out, but I suggested a much better method of stimulating his body and getting good exercise was to create something together in the rock garden. 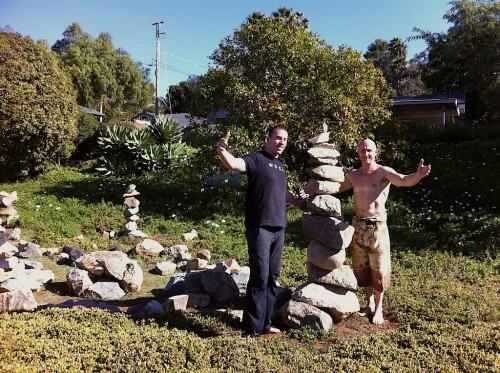 Here you can see the picture of our unique creation. After our morning visit with mother nature, including a very warm Father Sun, we headed to the institute to continue our business meetings, which were very productive and informative.

My mother’s sculpture was recently put on display at the Hannon Library in Ashland, Oregon. You can see the photo and the write up from Hannah Howell below: 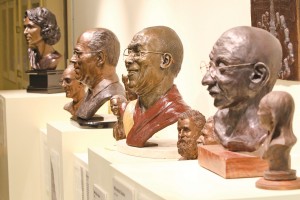 A collection of sculptures created by Ashland artist Meera Censor depicting famous humanitarians such as Gandhi, Mother Teresa, and others, is now on display at the Hannon Library, following a dedication ceremony on Nov. 4. Censor, a 66-year-old Ashland resident, began the 21-sculpture collection in 1997 with a bust of Gandhi.

This year’s campus theme of civility is illustrated beautifully in “Humanitarians for Justice, Non-Violence and Peace,” a new art exhibit in the Hannon Library, consisting of 21 bronze busts of famous humanitarians.
Dedicated Friday, the collection of sculptures was donated by Ashland artist Meera Censor.

Censor, a 66-year-old Ashland resident and mother of five, was inspired to create the collection by a personal experience with violence and discrimination during her teenage years that led to what she refers to as a personal “peak of non-violence.” She passionately believes that “violence begets violence, and the cycle only ends with an open mind and clear heart.”

She began the 21-piece collection in 1997 with a bust of Gandhi, her personal inspiration. The bust was the second sculpture that she had ever created. She followed the initial piece with busts of many others who she felt were either inspired by Gandhi or did something similar to promote justice and non-violence, including Chief Joseph, Mother Teresa, Meena Keshwar Kamal, Nelson Mandela, Cesar Chavez, and many others.

In addition to the sculptures, Censor donated her personal collection of books about each of the subjects to the Hannon Library, along with a copy of an accompanying book that she wrote about the 21 inspiring exemplars of civility, titled “Humanitarians for Justice, Nonviolence and Peace: Journey of an Unexpected Sculptor.” Her book is for sale in the Hannon Library, SOU Bookstore, and on Amazon.com for $15. The proceeds from her book sales will go to fund the creation of the final pieces that she would like to make for the collection.

This year’s last event honoring civility, titled “Civility, Democracy, and Conflict,” will be held Nov. 17, at 7 p.m., in the Meese Auditorium, and will include presentations from SOU Professors Edwin Battistella and Jon Lange, and retired United States Forest Service Historian and Archaeologist Jeffrey M. LaLande.

I’m so proud of my Mom and her achievements!

There is new evidence that sun exposure isn’t as bad for us as previously thought. What is now being suggested is that we get adequate amounts of open-exposure sunlight (without being burned) regularly.

Though this is yet another example of how medical “advice” changes as research technology improves and better statistical analysis is applied, we are being directed back into a healthy relationship with Mother Nature.

“As written in The Lancet: “Paradoxically, outdoor workers have a decreased risk of melanoma compared with indoor workers, suggesting that chronic sunlight exposure can have a protective effect.” ”
“Here are just a few highlights into some of the most noteworthy findings: [regarding protective effects of vitamin D]

â€¢ Some 600,000 cases of breast and colorectal cancers could be prevented each year if vitamin D levels among populations worldwide were increased, according to previous research by Dr. Garland and colleagues.

â€¢ Optimizing your vitamin D levels could help you to prevent at least 16 different types of cancer including pancreatic, lung, ovarian, prostate, and skin cancers.

â€¢ A large-scale, randomized, placebo-controlled study on vitamin D and cancer showed that vitamin D can cut overall cancer risk by as much as 60 percent. This was such groundbreaking news that the Canadian Cancer Society has actually begun endorsing the vitamin as a cancer-prevention therapy.

â€¢ Light-skinned women who had high amounts of long-term sun exposure had half the risk of developing advanced breast cancer (cancer that spreads beyond your breast) as women with lower amounts of regular sun exposure, according to a study in the American Journal of Epidemiology.

â€¢ A study by Dr. William Grant, Ph.D., internationally recognized research scientist and vitamin D expert, found that about 30 percent of cancer deaths — which amounts to 2 million worldwide and 200,000 in the United States — could be prevented each year with higher levels of vitamin D.

If you are interested in a better understanding of what the current investigators have found. For full article, go to Dr. Mercola’s web site to read more.

I’ll be busy seeing a client today, and working through projects.

I wish you all a pleasant, zen- day.