← RELATIONSHIP WITH SOURCE Looking For A Beginning . . . →

Well, the week is moving along swiftly!

I was so busy working on slide shows and coaching yesterday that before I knew it, twelve hours had flown by and it was time to head home with my buddy Rory Mullin and get out into the garden for some tai-chi.

I was feeling a bit frisky yesterday so I headed into the gym for a short, but intense deadlifting session.

I warmed up progressively until I reached 405 Lbs. Then I did a few sets of two with reptilian crawling between sets.

I only had about half an hour so that was all I could squeeze in, but I left the gym feeling toned and intact with LOTS of androgens flowing through my being.

Great stuff, particularly for people my age that don’t want to watch their abs and ass droop like a plum turning into a prune!

Today I’m working until about noon and then Vidya and I will take a little break to go get a steam together and see a friend’s new house.

Angie Lustrick emailed me the report from a schoolgirl’s science project. She looked at the effects of microwaved water on plant growth.

This is a great little science project everyone should know about. I’ve now seen a number of similar projects showing the radically damaging effects of microwave ovens on food and consumers.

It’s always been amazing to me that after spending time to show clients research on microwave ovens and their dangers over the years how many of them are so conditioned that they still go home and use them!

Amazing how easily people are programmed to the very degree that they loose all sense of logic and critical thinking.

Oh well, everyone has the right to determine how fast they want to deteriorate!

Microwaved Water and Its Effect On Plant Growth

Then after cooling she used the water to water two identical plants to see if there would be any difference in the growth between the normal boiled water and the water boiled in a microwave.

She was thinking that the structure or energy of the water may be compromised by microwave. As it turned out, even she was amazed at the difference.

The photos speak for themselves! 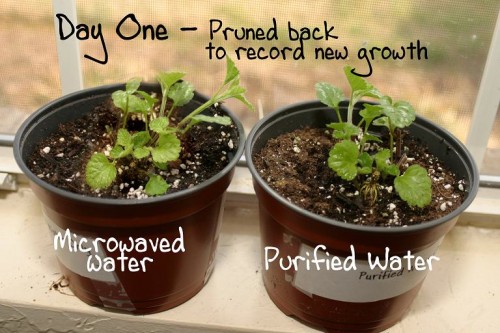 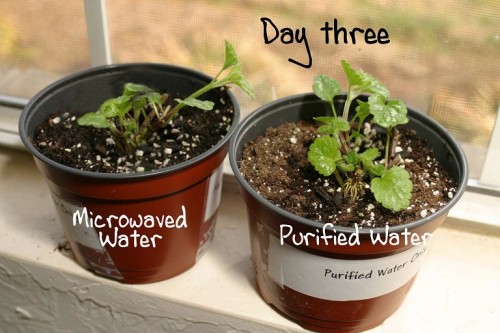 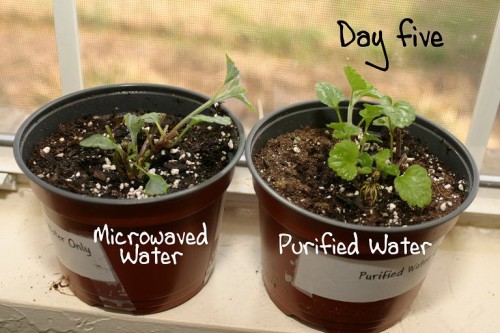 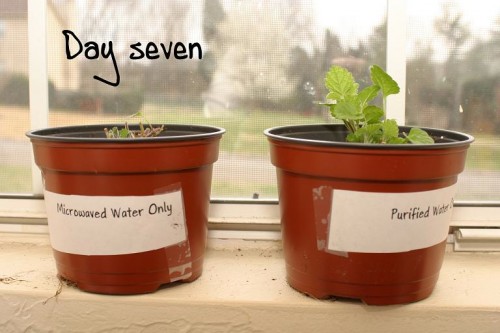 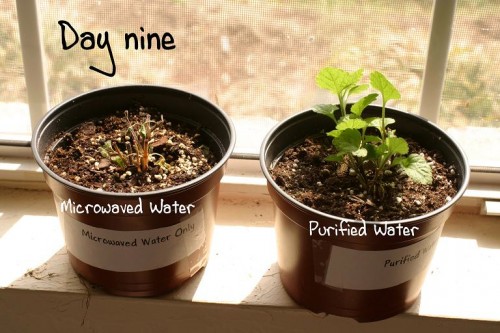 The experiment which was repeated by her classmates a number of times had the same result.

It has been known for some years that the problem with microwaved anything is not the radiation people used to worry about, it’s how it corrupts the DNA in the food so the body cannot recognize it.

Microwaves don’t work in different ways on different substances. Whatever you put into the microwave suffers the same destructive process.

Microwaves agitate the molecules to move faster and faster.

This movement causes friction which denatures the original make-up of the substance.

It results in destroyed vitamins, minerals, proteins and generates new stuff called radiolytic compounds, things that are not found in nature.

So the body wraps it in fat cells to protect itself from the dead food or it eliminates it fast.

Think of all the Mothers heating up milk in these ‘Safe’ appliances.

Did you see the report about the nurse in Canada that warmed up blood for a transfusion patient and accidentally killed him when the blood went in dead?

But the makers say it’s safe. But proof is in the pictures of living plants dying!!!

Below is a report that gives us the conclusions of the Swiss, Russian and German scientific clinical studies, we can no longer ignore the microwave oven sitting in our kitchens.

Based on this research, one can conclude this article with the following:

3). Male and female hormone production is shut down and/or altered by continually eating microwaved foods.

4). The effects of microwaved food by-products are residual [long term, permanent] within the human body.

5). Minerals, vitamins, and nutrients of all microwaved food is reduced or altered so that the human body gets little or no benefit, or the human body absorbs altered compounds that cannot be broken down.

6). The minerals in vegetables are altered into cancerous free radicals when cooked in microwave ovens.

7). Microwaved foods cause stomach and intestinal cancerous growths [tumors]. This may explain the rapidly increased rate of colon cancer in UK and America .

Those of you reading this please share this with others or if you don’t believe it, do the experiment yourself. 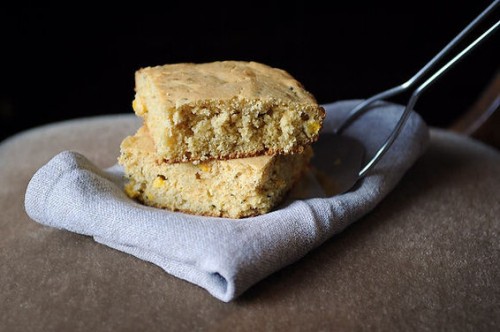 If you keep it overnight, you cannot eat it.
Eat it when it is fresh,
Before it gets dusty. 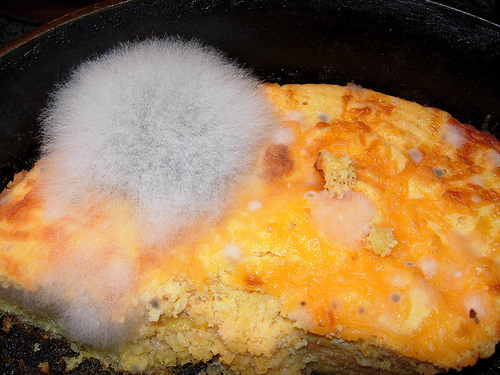 Its place is memory which goes fast, like fire.
But it dies in this world from the cold.

It flounders, flutters with one breath,
Like fish on the ground.

A moment later,
You see it become cold, then gone.

But when it is fresh,
If you absorbed its images,
You would drown many more of your own.

The Image you drink has to be very fresh.
It is no good to repeat the old one, hey man.

Ref: The Glory of Absence: Selections from Meter 12, Divan-I Kebir,

What is the message here!?

I see it as a message from Rumi to not loose our spontaneity.

How many times have we felt the excitement of doing something we really love and want to do, only to convince ourselves we don’t have time for this or that reason!

When we do that, the moment, the opportunity gets stale, then moldy!

Have you ever had someone beautiful rub against you, wanting some spontaneous intimacy!only to be so caught up in the mundane acts of you life and let the moment go stale like cornbread that’s been sitting too long?

Rumi is encouraging you to live in the moment and don’t let the many beauties of life get stale and moldy.

When you are laying on your deathbed, fresh cornbread may not be easy to get!