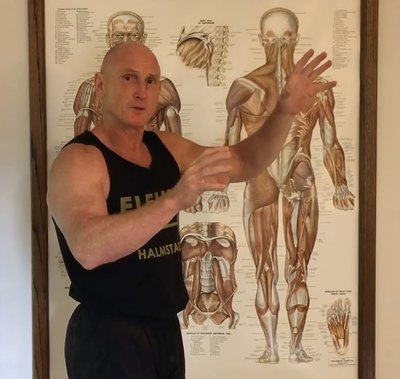 This week, I want to share a few tips about grips, particularly when you’re doing pulling exercises like lat pulldowns and chin-ups. (These tips can also be applied to other types of pulling too.)

Looking at the shoulder complex, we have what’s called a force-couple relationship. This happens whenever there’s two equal but opposite actions that produce a common goal.

To give you an image to work with, imagine what it’s like when you’re using the steering wheel in your car. You’re pushing it one hand and pulling it with the other they create the objective, in this case, of making a turn.

There’s quite a complex interaction around the shoulder joint and scapula to make these movements happen. If the timing isn’t correct, you can get an impingement of the head of the humerus on the acromion, pinch the supraspinatus tendon and get all sorts of shoulder problems.

Looking at an analysis of human shoulder movement, when we initiate abduction by raising the arm away from the midline, there’s what’s called a setting phase. That’s where the muscles around the scapula hold it still so the supraspinatus and deltoids can initiate the abduction movement. Then, they begin to work in concert to create that common movement of abducting or rising the arm above the head.

Initially, there’s only about 20 degrees of movement before the scapula sets itself. Then, there’s a concentration of movement from the whole force couple, yet research has shown inflexion – that setting phase – doesn’t occur until about 60 degrees. So, as you raise your arm, the scapula has a lot more freedom to move.

In other words, shoulder abduction, which has a much earlier setting phase, is a more complex movement. It has to coordinate the movement carefully and much sooner than it does in shoulder flexion too. 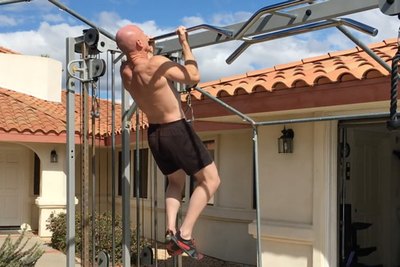 In this section of my video, I’ll demonstrate how I encourage people to organize their workouts when they want to use multiple grips when pulling.

As a general rule, if you’re going to do pulling exercises, you’ll want to orchestrate your sets so that, first, you do prone grip pulling. That’s the most complex movement for the body to orchestrate.

As a (bad) example of grip sequencing: Let’s say you do a V-handle lat pulldown, then do a reverse grip followed by a prone grip… your nervous system will be fatigued by the time you get to the prone grip exercise and your quality of movement will decrease.

Plus, if you’re experiencing other physical problems you may not be aware about — which many people do — it will magnify them, so you’re far more likely to have an impingement syndrome or disrupt what’s called scapulo-humeral or glenohumeral scapulo-humoral timing, which is the timing of the scapula on the thorax and the timing of the relationship between the humerus and the scapula. These timing dysfunctions are usually the beginning of what turns out to be a labral tear, rotator cuff impingement or tear or an impingement syndrome.

In my video, I demonstrate, with the chin-up and high-cable pull, how you can manage your workout  to achieve maximum performance and minimize your risk of injury. Remember, if you do the most complex pulling exercises first, as you get fatigued, you can still perform the easier ones quite well  because they require less neurological energy.

In conclusion, we need to order pulling exercises so that the most complex grip maneuvers — those that require horizontal abduction — come first.

There’s a lot of anatomy that I’m leaving out here for brevity. If you want to learn more about the anatomy of the shoulder, how to assess the joint complex and create proper conditioning programs, check out my Scientific Shoulder Training programs in my webstore.

Have a great weekend!