← The Ghost in The Machine Exploring Contemplative Meditation →

This week, I’d like to talk about something I’ve touched on, maybe once or twice in the past few years on my blog. It’s a concept I learned from Jerry Telle, an exercise scientist I worked with years ago.

In past blogs, I have shown you how to use length-force relationships and how we can manipulate the length-force curvature to get a deeper level of training, using the shoulder lateral raise exercise as an example. This time, I’m going to just take it a little further, and look at how to use this concept with the biceps curl.

This exercise has a high level of applicability to a wide variety of sports, whether it be rock climbing, rugby, football, hockey, any of the combat sports and even just good old hard physical work. 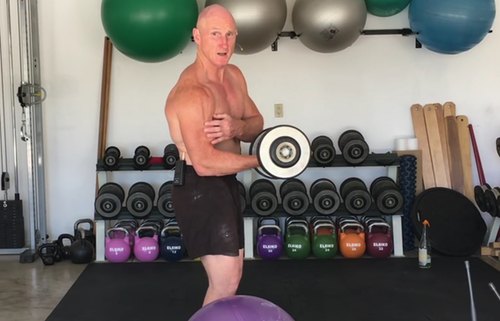 When you’re doing the standing biceps curl, the maximum load on the working muscle is when the forearm is parallel to the floor. That’s when you’re getting the most gravitational loading.

As the dumbbell comes up, I have more of an advantage. As it is lowering back down, I have more elastic force in the muscle so it’s a little less challenging, plus gravity is helping out too. When you understand where the maximum load on the system is, in any given lift, that’s where the system is going to make itself the strongest because you’re dealing with the most load.

In other words, doing the standard dumbbell biceps curl can make you very strong, but it won’t really enhance your strength in the beginning position or up at the end position. However, in various sports and work environments, you may have to be strong either one or both of these positions, such as when you’re grappling close with somebody in martial arts or other combative sports like that.

So, what if I take the point of maximum load, lean my body backward, but leave my forearm in place? Now I’m lengthening the musculo-tendinous unit, so I’m changing the point in the length-force curve where I’m getting maximal strength development. 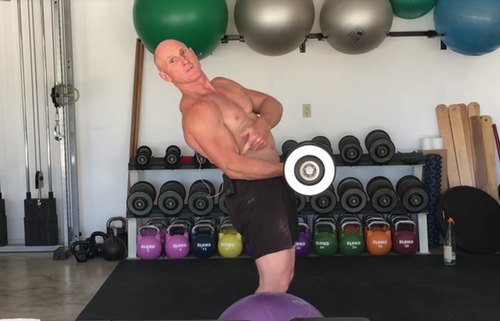 If you go the other way, and lean forward while holding the dumbbell still, the elbow is more flexed and you’re getting the maximum load way up at the end. Now, if you’re in a grappling situation where you’re working tight with someone, you need strength in here, not just in the middle range.

A simple way you can apply this principle: Instead of curling the dumbbell like we’re so used to, you can leave it in a stationary position, lean toward it and slowly lean back. Now, you’re getting a different physiological effect than you would if you were merely doing a standard curl. 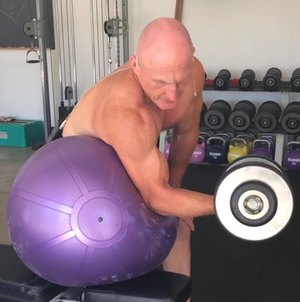 During my vlog, I’ll also show you how to do this exercise with a Swiss ball, and how you can adjust when you know you’re not going to make it through the sticking point, which is technically the hardest point in any lift.

Fair warning, you may want to just start off with one or two sets, working that to the point of failure (you just can’t move your arm anymore). But this type of training can make you so sore that you may not be able to comb your hair for a few days!

For those of you who are into putting on muscle mass, this is a very efficient way to do it, provided you follow the right diet and lifestyle and take enough recovery time.

On the other hand, this exercise can be a very good way to induce an injury due to overloading the body to the point that you don’t have the resources to recover. So use it with care and intelligence.

Down the road, I’ll show you techniques for manipulating the length-force relationship by using a cable machine.

I hope you enjoyed this week’s short lesson. If you play with the concept, you can get creative and come up with some new ideas of your own.

If you want to learn a lot more about techniques like this one, there is no better place to start than CHEK Exercise Coach.

Looking forward to sharing more with you soon.