The Power and Beauty of Swiss Balls

← Making Decisions: Heart, Ego or Both? An Invitation to Be The Change! →

Because it’s been a while since I’ve talked to you about the Swiss ball, I felt like it was the right time to reinvigorate your awareness of its beauty and power.

Around the beginning of 1988, I started working for the largest physical therapy clinic in San Diego. At the time, it had 22 physical therapists and athletic trainers and 13 surgeons. It was an interesting and very busy place to work.

When I started working there, I happened to be attracted to this great, big red ball sitting in the corner, but nobody ever touched it. So, I asked the owner, “What’s the big red ball for? I can’t stop thinking about it.” She told me it was a Swiss ball and that it was mostly used for neurological rehabilitation.

When I asked her why nobody used it, she said most people really don’t know how. My inner voice told me to look into it, so I did a worldwide search and asked a librarian to help me (this was long before the World Wide Web).

We only found one or two small booklets about them, mostly in the U.S. from physical therapist Joanne Posner-Mayer, but they were used then as part of aerobics exercise. The balls were kind of flimsy and not safe for the kinds of exercises I later pioneered. 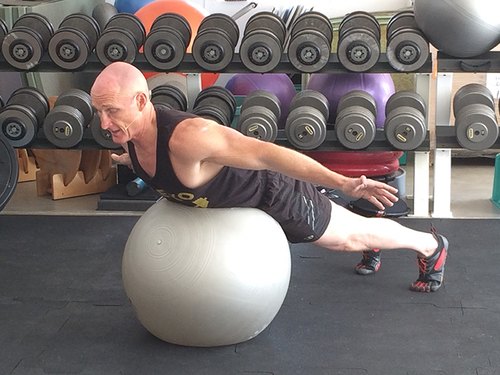 I was able to find or order books about Swiss balls from Germany and Italy, then studied the different exercises. In short order, it was very clear to me that the Swiss ball had a wide range of applications.

With my knowledge in human movement, motor science and all things related to rehabilitation, I was able to see how effective the Swiss ball could be, then take my knowledge and develop a lot of new exercises, techniques and assessment techniques.

I produced my first Swiss ball videos in the late 80s and early 90s. Swiss Ball Exercises for Better Abs, Buns and Backs was one of my first ones (that was actually a spinal rehab program I developed). People were amazed by the results they achieved, and still are.

Also, I produced the first videos in the world, Swiss Ball Exercises For Athletes, that showed people how to use them for athletic conditioning. The Chicago Bulls were one of the first sports teams to hire me to teach them how to use my techniques of core conditioning and how to train athletes using a Swiss ball.

Then, I produced the first videos on how to integrate Swiss ball exercises with free weights, cable machines and even gym machines (Strong ‘N’ Stable). At that time, gym machines were still the main way of training, which I was working hard to rectify.

What I want to do this week is review some of the many advantages of using the Swiss ball.

1. It’s portable. For a lot of athletes, especially professional athletes, I’ve written programs they can do on the road, because they can deflate the ball, put it in their suitcase and travel with it.

2. Because the Swiss ball is mobile, when you’re using it to exercise, it fires up your balance centers and activates your postural centers. Whenever you’re on the ball, it activates all the postural and balance mechanisms that we have to use to perform any functional exercise. That’s the opposite of machine training.

Paradoxically, it was always mind-blowing for me to see trainers put older people on exercise machines because they had poor balance. 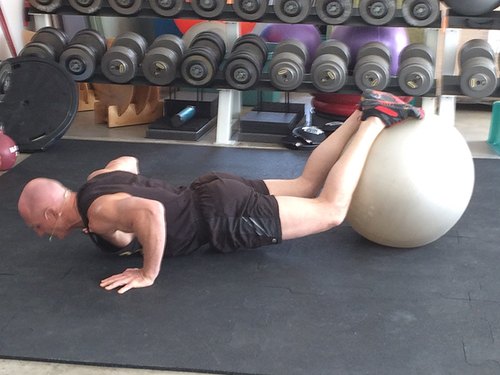 You’re never going to enhance a person’s balance on a machine. Any time you use any apparatus to stabilize the body, it shuts down recruitment of the core and postural systems.

This also does one more terrible thing: It builds strength without stability which leads to joint and muscle injuries and all sorts of trauma.

The secret is to give people exercise at their own level of ability, then progressively build up their balance.

3. The Swiss ball is also very good because it enhances your nervous system and the speed of your reflexes. Both get sluggish if we don’t use them. When you’re doing exercises on a Swiss ball, however, your body must react fairly quickly.

For example, imagine you’re on a Swiss ball. As you move your right arm upward (the weight of it is about 8 percent of your total body weight), your center of gravity is going up. Because your right arm is moving upward, it’s moving that arm laterally, so it’s really trying to pull your other arm that same direction.

So, you have to counterbalance any movement of body weight or changes in your center of gravity so that it keeps the nervous system awake and very active.

That’s important for everybody: Athletes and non-athletes and especially important for older people. The leading causes of death due to injury after age 65 are falls that cause hip fractures.

It’s not the fractures that kill older people, but the surgery it takes to fix the problem. Older people usually don’t have the ability to recover from them.

4. The Swiss ball can also be used for many excellent exercises that enhance posture too. For example, you can lay your stomach on top of the ball and just hold yourself in place, externally rotate your arms so your palms are facing away from your body and hold yourself in good postural alignment.

This is one very simple exercise anyone can do, but make sure you’re turning your arms over to activate the scapular adductors which picks the chest up. Be sure to keep the cheekbone in alignment with the collarbone.

If you hold that position until you’re tired and have a stopwatch running, then rest for half of that period of time, then go back and build yourself up to do three or four sets, you’ll strengthen your postural muscles.

Want to make it harder? Move the Swiss ball closer to your hips but be careful not to move too far forward. You may need to put your toes through a dumbbell or hook your feet under something stable.

Later on in my vlog, I talk about six-pack ab craziness and some exercises and stretches you can do with a Swiss ball that are better for your body and posture.

The cost-effectiveness of Swiss balls 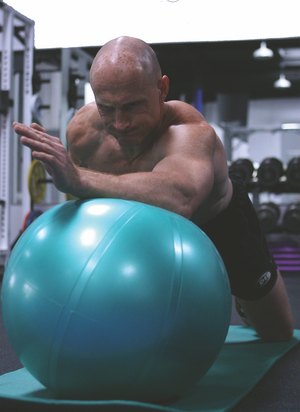 There are so many other things you can do with a Swiss Ball, just one very cost-effective piece of equipment. I have rehabilitated many athletes and completely relieved them of their pain by using nothing more than a foam roller for mobilization (and other techniques), a mat, a Swiss ball and a stick.

(Those very same tools are used by students who have taken my Golf Performance program, our Tennis Conditioning program with Leigh Brandon and CHEK Exercise Coach and C.H.E.K Practitioner programs.

For most people who are not that physically fit, the Swiss ball – with the right stretches and mobilizations – is enough to get them into very good shape.

During a trip to Austin several month ago to visit Onnit, one of their top instructors recognized me, shook my hand, gave me a hug and told me how he had been using my Swiss ball videos since they first came out.

He told me how amazing he thought they were for grappling or any kind of martial arts where you’re working on the ground via wrestling or Jiu Jitsu.

I hope you feel inspired to watch my vlog and explore the many things you can do with a Swiss ball, from the most basic training that even your Grandma can do to exercises for athletes with two levels of conditioning, learning how to mix all sorts of stuff and develop your own workouts and exploring the technical aspects of the Swiss ball as a rehabilitation, assessment and correction tool.

Have a great week!