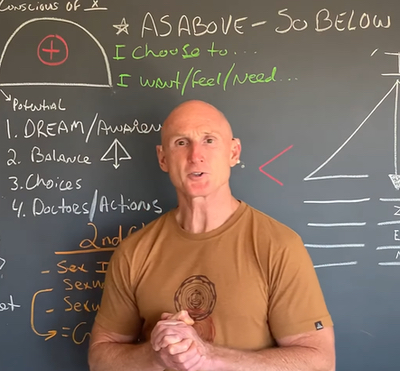 Hope you had a great weekend and are ready to start your week with more blackboard work in the second part of my Chakra system series.

Before reading any further or watching my vlog, if you haven’t reviewed Part 1 yet, please take some time to do so first.

I’m designing this series to help you do some great process work and healing. You just can’t do that if you’re skipping steps, and Part 1 gives you the framework for making that happen.

This week, I’ll be talking about the Second Chakra, which sits between the pubic bone and the belly button where the energy vortex enters the body. If you’re sensitive enough, place your hand in that area and feel the energy moving through you.

The Second Chakra represents a number of things…

For starters, the Second Chakra determines one’s sexual identity, meaning being happy or unhappy with the body you have.

People are undergoing sex reassignment surgery more frequently than ever. There are many reasons why, including the burdens of stress that can lead to a lifetime of pain, repression, illness and psychological disease. Whatever reasons people have, becoming honest with themselves is at the root of them and that’s a good thing.

Either way you go, polarity challenges can and will arise and they can be quite stressful if you don’t work on them. In most instances, however, what’s more stressful than dealing with sexual identity is repressing it, which is why it’s a real issue. (I talk about this in more depth at the end of my vlog.)

The Second Chakra is also one of the key physical centers where a lot of things happen. It’s where the kidneys and adrenals are located and, most importantly, where water passes through to fuel other vital systems in your body.

Without water, you cannot attach oxygen to the heme in your red blood cells, so you have no polarity differential and won’t live.

This is one reason among many why breathing and hydration is so important. Breathing is critical to creating a polarity differential or a charge in the body, and water is the source for the many different humours or fluids in our body, from the liquid in our eyes to cerebral spinal fluid, blood and lymphatic fluid… you name it.

What does that mean? Ask yourself what makes steam. It could be steamy sex, but I’ll give you a more earthy answer.

To make it, you must have something to hold water in a pot (the earth element), fire (the warming element), air and water. Chi encompasses the energy produced by the marriage of all of these elements, which is what we call life force energy in the Western world.

This is why I teach these elements in much greater detail in CHEK 4 Quadrant Coaching Mastery program, and cover them to a lesser degree in CHEK Holistic Lifestyle Coach Level 2.

The potential of your mind is limited by your sex energy too. You may have a lot of ideas and share them with others, but if you don’t have enough energy you won’t take action on any of them.

If your sexual identity is challenged — no matter what your preferences are or who you want to sleep with — this produces issues with your creativity too.

The key here is to examine the parts of your sexual identity, sexuality and life force energy that aren’t nourishing you, then identify what it will take to create more alignment and awareness in these areas so you can maximize your creative potential, ideally based on 4 Doctors principles.

Humans are born to be creative. If you’re having problems with creative energies, this usually means there’s an imbalance in any or all of your 4 Doctors.

It could also mean dealing with unmet business, whether it’s your own or unresolved issues with either or both of your parents.

What’s your story gap? Are you telling people a different story than the one you’re telling yourself? What’s your mask? That gap or secret story is usually something you’ve got to consciously look at and figure out or you stay unconscious. 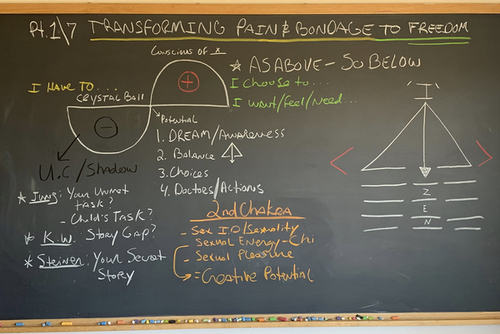 Sexual pleasure is very, very important too, not only because it’s a way of nourishing ourselves, but how it can alleviate stress for us. It’s a way of loving and appreciating ourselves.

Know this: One of the quickest ways to ruin a relationship is to expect somebody else to pleasure you sexually. When that happens, you turn that person into an object you’re trying to control just to make you happy.

There’s all sorts of religious taboos against self-pleasuring, which is part of the mind’s construct and it’s very necessary to give you the strength to become an adult and stand up for your own beliefs and needs. If you’re pleasuring and loving yourself, be aware that you’re pleasuring God.

My goal for this Chakra series is to give you the tools to grow your family tree efficiently and effectively to the degree that you participate. If this series merely opens you up to the realization that you need more help, that’s what CHEK Professionals are trained to do.

You can find one close to where you live by accessing my CHEK Connect webpage. There’s no shortage of help, either from a CHEK Professional, my training classes or books, if you really want to heal and grow.

I hope you enjoy watching my vlog and will join me again soon for part three of my Chakra series.