← “Threes Love To Chase Each Other” CELEBRATING HLC3 COMPLETION →

We completed a very successful HLC3 course yesterday and I am very pleased with the high caliber of conscientiousness of my students. Since I’m taking the day off and choosing to be in silence today I’ll share more with you tomorrow my reflections of the course. 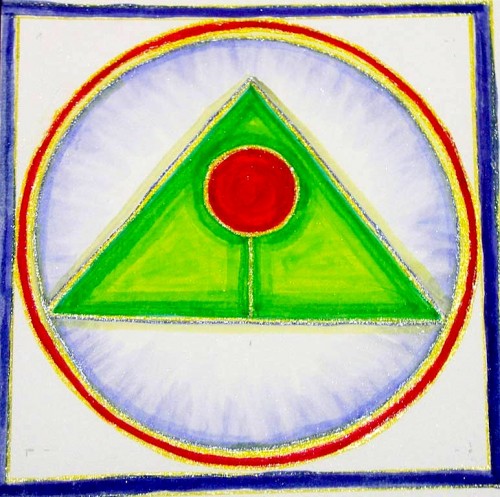 Spirit is the origin of every “thing”â€”Unconditional love
The One Becomes “Two”
As the female force of Yin and the male force of Yang
The consciousness of the One
Becomes conscious of in the “Two”
Consciousness infuses Spirit as male and female
To create the triad of experience.

The strength of the triangle used ubiquitously throughout
Metaphysics, art, construction and numerous types of engineering
Is composed of three “Twos” and a balanced geometrical formation
That offers efficient energy transfer.

TAO-TE-zen practice begins with awareness
Of the three “Twos” within each being
One consciousness expressed as Spirit
Manifests in the second pair of “Twos” is mind.

Mind manifests in the brain centers
The left-brain is more male or Yang, the right-brain more female or Yin
The third “Two” is the heart center
Expressed as love and appreciation for the male or the rational
And the female, the integrative.

The practice of TAO-Te-zen requires that thought and love make creative union
With the body through our organs and our extremities
Zen mind loves to create harmony with nature
There life becomes strong, enduring and creative
That is zen.

It is an illusion of the ego-mind that we are an individual; separate unto ourselves. We are All here as an expression of the creative energy in the consciousness of the universe itself.

In order to balance the “Two” of mind, the Yin and the Yang, Is and Isn’t, one must remember that All “things” you perceive to be as separate are not separateâ€”it is an illusion.

All people you perceive to be wrong are only wrong relative to your judgment, your position, your vantage point, your ideology, yet they are just as much a part of the universe and, therefore, have equal potential to be correct in any given situation that any of us do or, as any of us do.

Therefore to balance the mind means not only to manage your own thinking, such that you think about what you do want, and create what you do want, as opposed to letting your mind be hijacked by the constant stream of energy that is perceptible to mind.

Finally, we have the third “Two” of our triangle: the “Two” of body. As I suggested in the Sutra expansion, everything is created of Spirit; the body is no exception.

In the body, the forces of Spirit â€”Yin and Yangâ€”are expressed as five: the One, the All becomes the Twoâ€”the emptiness and the fullness.

The emptiness of the fullness then manifests the elements: earth, water, fire, air. Space is synonymous with tai chi, Yin Yang.

This construct, by the way, is depicted in the holy trinity of all world religions. To use a common example, Father, Son and Holy Ghost: Fatherâ€”the One (unconditional Love), Sonâ€”matter, Holy Ghostâ€”Spirit.

Though it would appear that they are separate, that is what the Hindu religion refers to is maya or the illusion. Body then is formed of Spirit in and as a matterâ€”matter is entangled Spirit.

A simple way to view this is to think of what it looks like at night if you take a glow stick and tie it to a string and spin it real fast like an airplane propeller.

What you’ll find is that if you can spin that string fast enough in a circle, that the glow light becomes one solid circle to your perceptible eye. Yet we all know that it is not a solid circleâ€”it is an illusion.

As we spin that string, because we are holding on to it, we create an entanglement. The light is entangled and creates the illusion of the circle.

Similarly, the body is entangled light and that entangled light is being spun by The Weaver, the universe, and it creates the illusion of something solid or seemingly permanent, metaphorically speaking here.

To have a balanced tube for body means that we must balance the elemental forces, which are emergent of the “Two” of Spirit-mind. The body is made of earth, water, fire, and air, which are all contained within Spirit itselfâ€”space.

If we have too much fire and air in us it produces too much heat, which begins to destroy the body.

So TAO-TE-zen practice of balancing the “Two” of the body is to be in tune with our biological needs. When we maintain a healthy diet and lifestyle as I teach in my Four Doctors philosophy, then we have our third “Two” in balance and, therefore, it is strong.

As always I encourage you to participate. See in your life and in the lives around you where you can see the imbalance, the lack of relationship to Spirit. See how that manifests in mind.

Dogmatic religion is one very simple example of an imbalance in Spirit-mind, which is due to misunderstanding and misguidance.

And that’s all beautiful because for each and every person there is something to be learned at each step along the way.