Hello and brilliant day to you!

My experience of my own soul began when I was eleven years old.

My mother and father split up when I was 5 and not having my father around, and feeling my mothers stress effected me deeply. Seeing my mother with another man created deep confusion in my sister, brother and I, for it seemed wrong, unnatural. As children, we had no faculty to understand the experience intellectually and were left solely to our feelings. Then, my father died when I was eight. No one explained what had happened, nor explained death. Therefore, my siblings and I were again left to deal with our own inner-experience. I could not accept that my father was not alive and thought my mother and stepfather were trying to trick us kids so I wouldn’t think about or ask about my father. I looked ceaselessly for him everywhere I went. There were times when I thought for sure I saw him driving a car going the other direction and became very emotional.

My mother and stepfather decided to migrate to Vancouver Island, British Columbia to start a sheep farm specializing in the production of black wool to sell to the spinning and weaving community made mostly of local Indians. My siblings and I experienced many traumatic experiences due largely to conflict between my mother and stepfather as well as his use of force to get his little duckies to be good, obedient farm workers. I felt as though I’d landed in hell and for the life of me couldn’t figure out what I had done to deserve such a life?!

My mother practiced Christian Science initially (before becoming a Yogi when I was 12), so my early years included exposure to Christian doctrine and dogma, which gave me some concept of “God”. From my earliest experiences, I found God to be a real pain in the ass! God, as far as I could see, had a terrible temper, was very controlling, much like my stepfather, and seemed to have a real problem with other religions! which I found very confusing since I herd “God is Love” in church so often! I had a hard time understanding how love could be so blind to the fact that all humans, and even all animals were here on earth together and ALL  needed love.

My father’s motto was, “an idle child is a useless child”, and he had an abundance of work to keep us from falling into the “useless” category; on a 140 acre sheep farm, there’s an endless supply of work to do! Whenever our chores were done, it was not unusual to be sent into the fields to pick rocks; where the grounds are rocky, you must remove the rocks or they will destroy plows and other farm equipment. I HATED picking rocks! (ha-ha, who would have known that all these years later that stacking rocks is my favorite activity!) Even at that age, something inside me told me that I was here to do something more substantial.

One day, after a particularly stressful day, I was in the field picking rocks and became so distraught with my life situation that I stopped, looked to the sky and began to give God a real bollicking (chewing out in English terms). I complained about the pain I was in, the confusion as to the purpose of my life and wanted to know what to do; I felt as though I was dying inside! After some deliberation, I had exhausted myself and entered into silence, just standing there with tears in my eyes. Suddenly, as though speaking from everywhere and nowhere at the same time, a deep, masculine, but soft and reassuring voice said, “your life is of purpose – you are here to accomplish a mission. Be patient and you will see.”

First off, I was shocked and thought someone was playing a trick on me, but since I was standing in the middle of a large field completely alone, I knew that something else was occurring. I also realized that there was a deep stillness in and around me – almost haunting quiet stillness.

Soon thereafter, I began having some very interesting experiences.

My parents made us go to bed at 7:30 PM, which wasn’t much fun at all, particularly in the summer when the sun would be up until 10:00 PM or later. I would lay in my bed and dream of ways to escape my parents and the farm. As I lay there one evening, I fell into a state of semi-sleep and suddenly, found myself floating above my bed; I was partly in my room and partly out the window, looking into the field behind our house. The shock of it scared me and all the sudden, as though a gene were stuffed back into a bottle, I was jolted back into my body. After a moment of regaining my composure, I realized in some strange way that this was my ticket out of my room! I relaxed myself and waited to see if it would happen again. It did! This went on for many days and each time it occurred, I became better able to stay relaxed and use my mind to control my flight. I got to the point that I could go visit my tree fort, visit the animals, and look all around the property.

I didn’t tell anyone because I was afraid that I’d be criticized, or that maybe my parents would think I was mentally disturbed and send me to a doctor or something like that. Through these experiences, I gained a deep inner-trust and confidence in myself, for now I knew I could escape any form of confinement.

These experiences left me with something very special; I knew “I was being heard by The Voice, and that indeed, I did have some special ability that I’d never heard any other children or adults speak of. I continued to consult the voice, mostly in times of trouble and was always reassured that things would be fine and that I was learning what I needed to learn to complete my mission.

With my studies of world religion and metaphysics, which intensified in my late 20’s and early 30’s due to my desire to help patients so complex I couldn’t figure them out, I began to learn about the soul. I came to the realization that “The Voice” was indeed my own soul and asked the voice, “are you my soul” and the answer was “yes”. I than asked, “are you God?” Again, the answer was “yes – I am God in you”.

It’s been many years now that I’ve been in dialogue with my soul, which has become my most cherished, most reliable, nurturing inner-Lover. She has guided me through many a storm in my life and every time I listen and act accordingly, things have always turned out better than they ever could of if I’d made the decisions my ego-mind encouraged me to make.

In the process, I asked my soul, “what is your function in my life and the life of human beings?” I was told that the soul is God in each created being and is always there as your intuition – your conscience – your own personal inner-compass. Your soul’s function is to guide your body and mind to the point that you can see, feel and experience the truth of Love and life in and around you, and ultimately to become consciously aligned with the creative plan of the Universe.

The soul is God guiding God into the birth of Self-Realization; realizing that you, and all are God and that God’s greatest joy is waking up to the realization that all life is a fun game of hide-n-go-seek. That once you awaken to who and what you really are, it’s as though you’ve tagged God and said, “Gottcha! Your It!”, then and there, you and The Voice have a tremendous laugh and cry – for now you realize in astonishing beauty that all the pain, trials and tribulations were but a birthing process – a process of becoming real and learning to love. I was told that the world is a very small, but very special place in the universe where we learn to fly so we can explore the Universe, but before you can leave the earth, you must learn to take responsibility for your creations. This is because outside the earth-plane, your capacity to create reality for self and others occurs faster and faster; if you don’t know how to manage your creations, you become destructive to yourself and others. Just as you wouldn’t give the keys to your car to a six year old (regardless of how well they drive on a video game) because they may harm themselves and others, you must earn the keys to the Universe.

The earth is like a kindergarten for budding souls that need an ego for self-awareness. Once you demonstrate love to Nature and all her beings, your capacity to explore greater and greater regions of the Universe grows, and each step of the way, your fear of death diminishes, for you soon come to know that you are not your body – you are a soul who’s only function is to enjoy God, which is “the rest of you!” 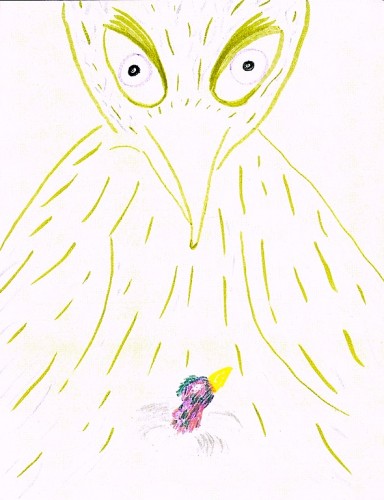 My drawing here represents the soul overseeing the growth and development of it’s ego, patiently awaiting the day that you tag God and happily pronounce, “Your It!”