Whew!24 hours on the road to get from London to Carlsbad airport. Penny and I began our journey home yesterday early in the morning. Our flight from London to LA was delayed almost an hour, and then with head winds, we were further delayed.

We arrived in LA to find that customs was closed in terminal 7 where United flights usually enter so we had to transfer to the Tom Bradley International terminal. This meant going through customs, getting our bags there, transferring them back into US transport, and found that we had not been given new bag claim checks even though United had canceled us on our 4:05 flight to Carlsbad due to late arrival.

We worked through that issue and then had to hike over to terminal 7 and go through security yet again!

By the time we got home, I felt as though I’d traveled to Sydney!which I will be doing shortly too!

My beautiful wife was very tired since she’s been on the road two weeks longer than I have and worked two conferences in England. I gave her a head, spine and foot massage in the terminal to keep her going.

That behind us, I can’t say how lovely it is to be home with my home, garden, rocks, soil, office, Vidya, my library and “you!” of course.

Time is tight for me today with phone coaching engagements so I’ll be brief today. 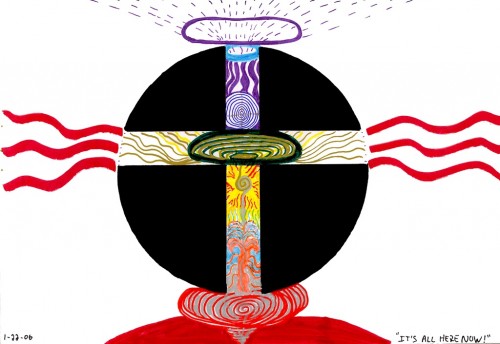 Seeking Altered States Of Consciousness
Everywhere I go in the world, I’m constantly fielding questions regarding serious health challenges by health and exercise professionals and their concerns over clients and loved ones that are suffering. It is very common that people tell me stories of how they, their clients or their family members resist natural healing approaches and instead, choose to stay on dangerous medical drugs, even though they aren’t working!

In his excellent book, Process Mind – A Users Guide to Connecting with the Mind of God (2010), Arnold Mindell makes a beautiful point that I completely agree with. On page 132, dialoguing about our process mind (the unconscious mind of the Universe, inclusive of the Super-conscious mind), Mindell states:

“For example, from a materialistic viewpoint, the symptoms of a cold might be due to the flu. But our process mind might add to this viewpoint the idea that the flue is a chance to explore altered states of consciousness. In any case, from a teleological viewpoint, symptoms may remind you of something you need to know about yourself, your relationships, and the world”

There is DEEP WISDOM HERE!

As a child, my mother took me to the Self-Realization Fellowship where I learned two effective methods of meditation. Even as a young lad of twelve, I was able to effectively experience altered states through meditation. These methods helped me feel much more safe, more free.

Through meditation, I was able to experience being free of and out of my body. My world became as big as the universe.

I found that I could share my pains with the rest of me.

As a shaman, I’ve explored a wide variety of methods for achieving altered states, including the use of psychedelics ranging from those that are very gentle like marijuana all the way to the most powerful psychedelics in the world.

Because these entheogens (God molecules) were very healing for me in many ways, I felt it was my duty to investigate them thoroughly. I’ve studied the works of Terrence McKenna, Ram Das, Stanislav Groff, Timothy Leary, Aldous Huxley, Huston Smith and many others who have lead these contemporary investigations.

I found through my studies many scientific references showing that in fact, every creature (both human and other) studied had found, and used psychedelics and adaptogens (stress relieving molecules) to cope with stress.

Our culture, particularly in the western hemisphere, has been railroaded by corporate interests, particularly the drug manufacturers and medical establishment, as well as the governments.

Because legalization and control of drugs is the most profitable venture second only to religion, they have gone a long way to protect their turf by making almost any legitimate healing molecules or drugs illegal.

The result is that we have a culture that is afraid to use the plants or drugs that have the most healing powers, and instead, choose to stay within consensus reality, dying slowly on lousy drugs designed NOT TO WORK.

If their drugs worked, they would essentially diminish their business opportunities to the degree that profits would go down as people at large healed.

Because natural means of healing are always associated with expanded consciousness and connectedness with people and the world as one living unity, their use diminishes nationalism. This means that the State would loose it’s ability to convince people to participate in unethical war efforts, such as we see constantly going on in the middle east.

The result is that humanity at large has had to turn to illness as a means of getting out of the cage of the social and individual ego.

It is my dream that all of us who are experienced in natural healing methods, such as the approach outlined in my program titled, The 1-2-3-4 For Overcoming Addiction, Obesity, and Disease reach out to others and offer them a safer means of getting outside the black-box of the ego-mind.

When we do this effectively, people gain a new sense of wonder, love and appreciation for the wholeness and undeniable interdependence of life. They come to see that they are themselves, an expression of the planet and therefore, begin to care for themselves and the planet as One.

By completing PPS Lesson 1 and practicing the meditation techniques I share in my Dr. Quiet audio companion, people can safely learn to experience altered states.

In these experiences, they gain the confidence to climb above the confines of organized religion and social convention. They learn to cultivate and take responsibility for their own freedom.

The very best thing we can do for the world, and those that we love, is to accept responsibility for our own health and freedom!

Only when we do so, will we provide those stuck in fear with the evidence that our approach is indeed safer and more effective than the conventional approaches.

I’ve found that radiating love is far better than being radiated!

Let’s all hold hands and be the leaders showing the world and Her children the road safely back to health.