Rumi’s Meeting of the Ants!

I was excited to get a massage and have a steam and go home and read today after a busy week of work!but, I decided I’d rather work on my infant development chapter for the new HTEM&BH! this afternoon.

I had a great day with Donald Vega CP3, and his client Ernesto, who was a famous Super-Cross motto-cross racing star before injuring his spinal cord at C6 and becoming paralyzed.

I was very impressed with the great work Donald has already done with him. I get such joy when I see my students practicing what I’ve shared with them so the knowledge becomes living knowledge instead of fancy talk. Thank You Donald!

I plan on having a lazy weekend in my garden, mulching my fig tree and my lime tree, and maybe doing some art.

Vidya is going to the gem show in town and hopefully, she will find some good healing stones I can add to my collection!

Today, my soul guided me to a lovely teaching story by Rumi I’d love to share with you for the weekend. This story is excerpted from this beautiful book: Selected Poems From Mathnavi Persian – English, Translated by Reynold Nicholson.

RUMI’S MEETING OF THE ANTS!

An ant, walking on a piece of paper, saw the pen writing and began to praise the pen.

Another ant, which was more keen-sighted, said, “Praise the fingers, for I deem this accomplishment to proceed from them.”

Another ant, more clear-sighted than either, said, “I praise the arm, for the fingers are a branch of the arm,” et cetra.

A little ant saw a pen (writing) on a paper, and told this mystery to another ant,
Saying, “That pen made wonderful pictures like sweet basil and beds of lilies and roses.”

The other ant said, “That artist is the finger, and the pen is actually (no more than) the derivative (instrument) and the sign.”

A third ant said, “It is the work of the arm, by whose strength the slender finger depicted it.” 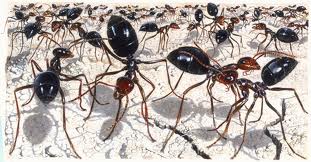 In this fashion it (the argument) was carried upward till a chief of the ants, (who) was a little bit sagacious,
Said, “Do not regard this accomplishment as proceeding from the (material) form, which becomes unconscious in sleep and death.

Form is like a garment or a staff: (bodily) figures do not move except by means of intellect and spirit.”

He (the wise ant) was unaware that without the controlling influence of God that intellect and heart (mind) would be inert.

If He withdrew His favor from it for a single moment, the acute intellect will commit (many) follies.

If you follow Rumi’s story of the ants, you can see he is reminding all of us to keep “looking behind appearances and actions” until we reach an impasse.

That impasse is SOURCE, and SOURCE = SUM.(Wholeness)

The pen is held by the finger, the finger acts in accordance with the arm, the arm expresses the head, the head expresses mind (vibration), vibration emerges from SILENCE, PURE POTENTIAL, PURE INTELLIGENCE.

Rumi is reminding us not to worship pencils, clothes, cars, money,! material things!

Be aware of, and present with THE ONE (Rumi’s ONE = ZERO!)

Have a fantastic weekend enjoying Life!!