I hope you are reading this blog after a restful, restorative weekend. I had an absolutely beautiful weekend, and as usual, have a few insights to share with you from my own process in hopes that in some way, my experiences can add value to your own life and the lives of those you touch.

REST
I had a very busy week last week and was very ready for a weekend of rest. Like many of you I suspect, I have a lot on my plate each day, yet I always maintain my core values around food, exercise and my spiritual practice. I went into the weekend with quite a buildup of mind fatigue from managing so many cases and business affairs, as well as having built up some soreness from heavy lifting in the gym and in my rock garden. Though I typically rise around 4:00 AM so I can get to work and do my morning thanks-giving, sun meditation and write a blog for the day, I decided to stay in bed until I wasn’t tired. I woke each day this weekend feeling rejuvenated and ready for the day, started with a short-shot of organic espresso with butter and a blend of healing teas. I took my big cup of tea across the street on top of the hill next to an oak tree where I meditated with the rising sun. I felt great joy and inner-peace knowing I had no appointments or anything I needed to remember to do as the sunlight flowed into my eyes and being.

As I was resting, I thought of the thousands of people I’ve consulted for health challenges over the many years of my career who were largely suffering from lack of rest. By the end of the day Saturday, I saw my face looking younger, my muscles and joints becoming supple and more free, my already good bowel movements becoming perfect in accordance with the Poopie Policeman standards in my book, How To Eat, Move, and Be Healthy! My mind became clearer and clearer as the weekend progressed. I was reminded yet again, that rest is the domain of Dr. Quiet, the Chief Physician in my 4 Doctors system (you can read my 4 Doctors e-book here if you are interested).

Dr. Quiet is the chief anabolic (restore and rebuild) physician. If we don’t get at least eight hours of quality sleep each night, we over-utilize

Dr. Movement, who is Chief of energy expense and we can easily run our energy reserves down to the point at which we can’t repair our glands, organs, muscles and joints optimally, leading to niggling injuries, minor illnesses, and other ailments, which are essentially the body reminding us that we need rest! Notice I said “rest”, not “more medical drugs, doctor visits, or harder workouts to try and get rid of the fat and water accumulation that go hand-in-hand with “stress accumulation.” Rest should always be our first medicine. It’s free and works like magic. Start there if you are feeling less that optimal. 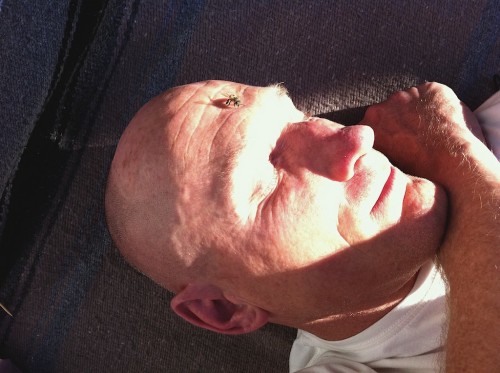 BEES
Here you can see a beautiful little honeybee hanging out on my third-eye while I’m taking a power-knap in the sun. When I was a kid on our pig farm in Idaho we had an old abandon house on the property that was infested with wasps and yellow jackets. These guys are carnivorous and unlike honeybees, who die after stinging you, they can sting repeatedly and very painfully. I liked exploring the ruins in that old shack-house and learned the hard way to stand very still and relax when they started investigating me. When we moved to Vancouver Island, British Columbia and started our sheep farm, there we are lot of bees on our property and they would swarm where we were working in the fields now and then. My brothers and sisters would be afraid and swing at them, which only threatens them and as you can imagine, they would get stung, as well as increasing the chances that someone else would get stung. Since the wasps had taught me the benefits of stillness in their presence, and to just let them crawl on me and taste me until they figured out I wasn’t part of their normal menu, I used the same method with the honeybees. I only wish I had one of the modern digital cameras then because there were times my whole body was practically blanked with honeybees. They never stung me. I love to feel and hear their little feet and wings. It gave me a deep sense of connection to nature and taught me that unbridled fear is almost always counter-productive in nature.

I let this little guy enjoy nibbling and tasting me for a good ten minutes or so, which brought back many childhood memories. As you may know, we are facing a serious danger now because the honeybees are dying out. This is critical to be aware of because essentially, they are Mother Nature’s sex organs for a huge percentage of plants and tree species. I feel that they are suffering from too much electromagnetic buzz in the environment, and too much artificial light. They are, like all living beings, directed by the sun in their rhythms. When we expand cities into rural areas, without realizing it, we push much of nature out of their own homes, causing them to recede into the outskirts of towns and cities. Yet, our lighting systems can, in my opinion, disrupt their natural work-rest cycles, leading to fatigue. I’ve been seeing dead bees everywhere I go in record numbers. This concerns me, particularly when Rudolf Steiner warned that there are two things that must stay intact if humans are to survive!bees and trees. That is worth meditating on in light of what’s going on with rain forests and bees world wide, which both now face extinction!

PATTERNS
These two beautiful and complex rock stacks were built by Vidya. Vidya is an incredible artist and craftswoman. She has an incredible ability to see patterns in her inner-vision, which she can draw or craft with incredible reproducibility. As we learn to rise above our intellectual mind, we can begin to see with inner-vision, which Steiner often referred to as spiritual-vision. As this ability develops, we begin to see auras and energy patterns everywhere in life. This allows us to see the inter-connections of all things, animate and inanimate. We come to see that all life and nature is made of energy in patterns. Some of these patterns are what I refer to as static-dymanic, such as stones, which change quite slowly relative to plants and animals, while others are very dynamic, such as the energy patterns emerging from water as it flows in rivers, creeks and streams, on the seashore.

Because I can feel and see energy lines, I really enjoyed watching and feeling how Vidya’s rock stacks changed the energy flow-lines in my zen garden. We had a lovely time creating. Much of our art expresses what I’d refer to as primal energy patterns. These are the patterns most essential to nature and our survival, for like those emanating from stones, they create the matrix of natural life. When humans begin disrupting such patterns and pattern generators, the result often shows up first as confusion, then illness, and finally disease, leading to premature death.

Think of my comments on the bees above for an example of this. I believe this is one of the key reasons we have so many children with mental-emotional disorders being treated by dangerous medical drugs today. Researchers looking into what is now called a “Nature Deficit” has shown that children with many of the common mental and physical ailments were healed or helped significantly by a once weekly field trip into nature, where they were allowed to play and explore unobstructed. Maybe we should put more emphasis on letting kids play in nature and less on learning how to memorize potentially useless information?

TRUTHS
I watched a very interesting DVD with Vidya this weekend titled, Freakonomics. This DVD looked into a number of potentially controversial issues, including:
â€¢ Whether or not a person’s name has any influence on who they become.
â€¢ Cheating in the sport of Sumo Wrestling, which was thought to be about the only sport free of cheating due to the strong ties with the Japanese religion of Shinto; you’ll be surprised at what they found when they analyzed the data! It turns out that Shinto and the Vatican have a common disease!
â€¢ Crime rates in the US dropped significantly in the late 1980’s and there were many claims to that success from government and the police departments in major cities. Investigators make a quite surprising discovery as to the actual cause in lowered crime rates, which may be quite a surprise to you! Yet, their finding also showed that the government and police departments claims of success were actually quite inflated!but I’m sure that’s no surprise to you!
â€¢ Cause and effect relationships: The investigators looked into cause and effect relationships, showing that what we often think is the cause of changes in our lives actually aren’t what they often appear to be.
This DVD is easy and fun to watch. It is packaged as a series of short movie segments that function like chapters in a book. I think you’ll find it interesting, educational and enjoyable to watch. At lease we did.

I dream that your day will be as beautiful as mine!