← THE SUN IS SHINING BRIGHTLY IN LONDON! I LOVE MY HOME!! →

I hope this finds you all happy and well wherever you may be.

My day began early. I was up at about 3:30 because my body won’t sleep past about that time every day since being on the road.

I wake up fully alert (comes with circadian rhythm disorder from excessive jet travel!) and laid in bed thinking about the many ways I still desire to help humanity find health and well-being.

After about an hour of that, I finally started to feel sleepy again.

Thankfully, I feel asleep and was woken by my alarm at 6:00 AM. I needed to get up and take a cold bath to start my day because the shower won’t go cold here (old English hotel!).

After that, I got dressed and had a cup of Pukka three ginger tea to give me some inner warmth in preparation for my tai-chi.

Before tai-chi, I headed to the kitchen for some English breakfast. Today I had two eggs over easy, baked beans, baked tomatoes, and baked mushrooms. That did me nicely, even though I experienced the emptiness of fullness that comes with eating commercial foods; can’t find any organic foods around here other than a few cold vegetables!

After breakfast, I did tai-chi in the garden here next to some trees because it was cold and windy, in line with what is typical English weather. I don’t really mind though.

As I often tell my students, the cold weather with bare feet keeps you honest about learning to move chi so you can stay warm â˜º.

I was picked up at about 8:30 AM to head into the Five Fingers Headquarters where myself and Barefoot Ted were scheduled for a variety of media interviews.

I got into Matt’s warehouse early enough to get a workout in before all the interviews began. I warmed up for my heavy lunge session today with a variety of sets and exercises with Matthew’s wooden clubbells and some kettlebell snatches with about 40 pounds. 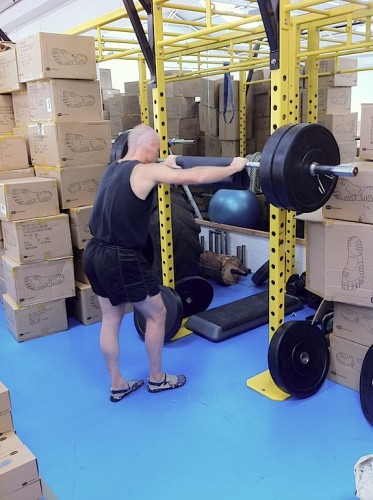 Once I started lunging and warming up, I noticed I was feeling more energized than any day on the trip so far! 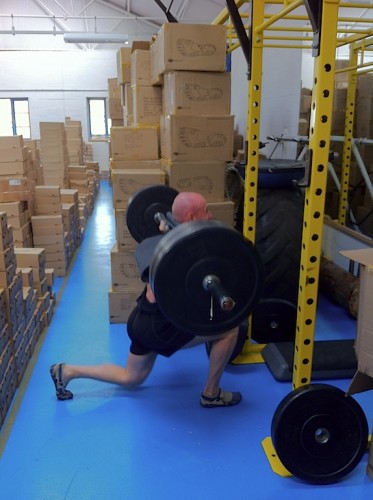 After lunging, I warmed my way up to 185 pounds for the Swiss ball bench press and did five or six sets of that, which also felt great! 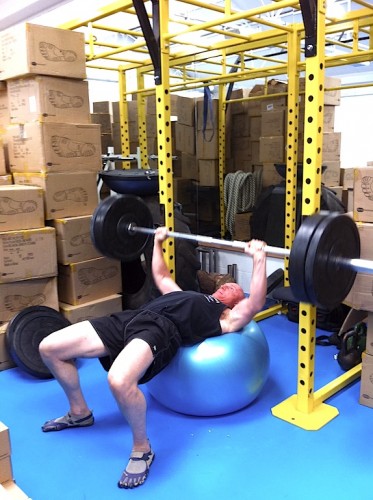 While I was resting between my interviews and after mine were done, I got to hear Barefoot Ted on his interviews.

It was so joyous for me to hear a man speak from his heart so naturally and authentically about his wide, diverse experiences running barefoot all over the world with the many native peoples he’s contacted.

I was really impressed both with Ted’s deep, practical spirituality, and his extensive knowledge of a wide variety of topics related to the human body and mind, both in the field of exercise, and in life in general.

I really feel like I’ve met a great Brother on the path to helping others find their flow, their path, their love, their bliss.

While we were doing our thing this morning, Matthew showed up from the airport with world renowned tracker, Louis Liebenberg. Louis does a lot of work with the Kalahari Bushmen and many other tribes in South Africa.

Matthew, Ted and I got into some very interesting conversations with Louis. There was plenty of passion in the room, I can assure you! 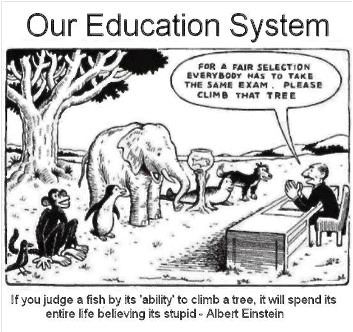 While we were all chatting, it came up in conversation that a film of bushmen tracking and performing animal dances had been made by bunch of academic anthropologists which featured Louis and a number of the bushmen he knows.

He was telling us how the university anthropologists edited out the most important parts of the film, showing how the bushmen prepare for, and perform persistence hunts.

Apparently, they didn’t want people to know the actual truth of how they do it because it doesn’t fit with their theories!

Both Louis and Barefoot Ted (who’d seen the original footage) were vibrating with frustration over this academic fraud. Ted was very sad and Louis discontinued any work with them whatsoever because of the situation.

This led into all of us discussing how often this actually happens in both the healthcare and/or medical field, and many other fields.

It turns out that Louis, who’s lectured in many prestigious universities around the world didn’t even finish high school. I informed him that I too only finished the ninth grade.

That began a discussion as to how so many great thinkers and people that make legitimate advances in many fields didn’t go to college and often didn’t finish high school either!

This problem is nicely discussed and explained in Ken Wilber’s excellent book/audio titled A Brief History Of Everything.

Louis was telling us how many of the South African bushmen are thought to be stupid by whites, yet little do they know that the intelligence of these bushmen is exceedingly high (to learn more about Louis Liebenberg: www.cybertracker.org ).

Barefoot Ted, who’s spent plenty of time with natives living naturally around the world, also expressed how true it was that these people that seem very simple to the average western mind, are actually very skilled in many ways and are actually often much more whole than the people we deem as experts or guru’s in our western culture.

It was a great morning that spilled over into a very lively discussion over lunch. On the way home from lunch, we were taking the back roads and the sun was out. It was very beautiful. 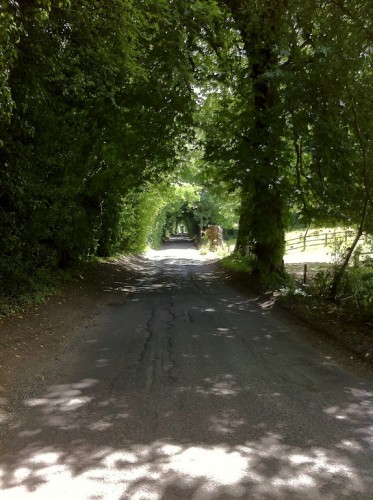 I had to take this photo to share with you. England is certainly cold and wet in general, but let me tell you, when the sun comes out, this place is magical!

I’m in my hotel room now and will take a little nap before I make one last run at refining my slide show for the Barefoot Conference in London tomorrow at the Natural History Museum.

I’m excited to participate with so many beautiful, natural, empirical and scientific minds.

I’m very proud of Matthew Wallden, one of my first students in England as well. Matthew has worked hard for many years to not only master his craft as a Naturopathic Physician and an Osteopathic Physician, but to master my teachings and become a fantastic instructor who is one of only two that can teach at the CHEK 3 level.

Matthew is a great mind and as such, has attracted some of the greatest minds in the world to share with him at this, and other conferences he’s arranged over the years.

I’m looking forward to seeing the CHEK Practitioners that show up at the event tomorrow as well. I’m always proud of them, for they are leading the way into holistic health and exercise.

They are validation of my own legacy and it was a great pleasure to hear from Barefoot Ted that my name has come up many times in his travels and that he’s really enjoyed interacting with CHEK Practitioners as he travels too!

Thank you all, and to the staff at the CHEK Institute (and Penny, the Mother of the Institute), and Vidya for managing me and my crazy schedule, for making my life one where I’ve been able to experience the joy of contribution!

Here’s to real education, which can’t happen only in your head in a class room!