← DEVELOPING INTUITION ~*~ Filming And Fun In The zen Garden! →

Hello and welcome to a new day!

Today, I thought I’d share a little about nature spirits.

Throughout history, people have reported seeing and interacting with nature spirits.

All the while though, there have been those who doubted their existence and of course, such people don’t see them. As usual, the ones that don’t see them tend to ridicule those that do, which is merely an expression of their own fear or jealousy; people in general tend to feel diminished in some way when others demonstrate abilities that they don’t think they have.

Because jealousy is an act of exclusion, being jealous expresses a divided mind-state and often emerges in those that lacked nurture as children and/or being over-controlled by parents.

Whenever we feel we must compete to survive, our orientation is toward self-defense.

Whenever children are raised with enough love to be open to love, they naturally see love all around them.

An exception to the general response to such conditioning occurs when a child finds refuge from a stressful home environment in nature. There, they often befriend birds, squirrels, lizards, snakes, frogs, cats, dogs, bears, and the like.

When we extend our family to nature, we develop relationships with nature and open ourselves to the experiences of such relationships. I was such a child.

The term “nature spirit” only seems odd and mystical to people because they don’t understand what it means, which results in projection of their own interpretive bias. This naturally results in confusion.

Imagine if I were talking about a chakra and you were afraid to ask me what a chakra is. If instead of asking, you projected the idea of a box without realizing that the word chakra means wheel, or vortex, there would naturally come a point where your confusion would manifest as a deep frustration. Because your experience of chakra energy wasn’t behaving in a box-like manner, you may choose to give up on the concept, or conceal your frustration and pretend you were feeling what others report.

It is this very kind of situation that often results in people avoiding or giving up the intuitive healing arts in favor of the so-called scientific approach – which means to believe only in that which can be weighted or measured.

This mindset both shuts down one’s feeling-nature, allowing only what they can see and feel physically to be real. Yet, all the while, all such left-brain dominant people have to face a deep state of confusion within because there are truths inside them that constantly go against the mask they choose to wear, largely out of fear.

For example, I doubt you would find a scientist anywhere that doesn’t agree that love is the most powerful force of healing there is, yet, no one has ever been able to measure or objectify what love is!

Many scientists believe in God, yet, again, can’t measure or objectify what God is. All such people are conscious, yet, can’t define what consciousness is. Though I could list many such examples, I suspect you can see already how anyone with even average intelligence and a conscience must come up against themselves. They ultimately have to agree with themselves to play a game in which they must ignore those things that are very real within them while casting doubt on others who speak of such things as “real”.

A nature spirit is the embodiment of love, consciousness, and the thought-form or astral-mental body of each being in nature.

Nature spirits also exist very definitely in elements, such as rocks (earth), water, fire and air; it is because a nature spirit exists in a flower that it will turn itself toward the sun after you’ve turned it away from the sun!

To exemplify their importance, simply imagine what would happen to your consciousness of self without water in your body?

Nature spirits, put simply, are that which lives within each form overseeing the growth, development and conscious interactions with any and all other spirit-bodies or beings in their realm of existence.

To see nature spirits requires the exact skill one uses to read human or animal auras. Reading one’s aura could rightly be said to be equal to reading their nature spirit.

I hope you enjoy my image of a moon spirit that appeared to me during one of my my meditations. 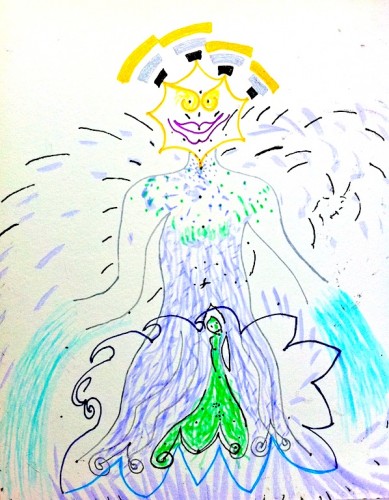 2. A love based conscious disposition.

3. A practice that cultivates deep relaxation.

Unlike the sympathetic system, which is the system of exclusion, defending and flight or fight actions and activates the left-brain hemisphere, the parasympathetic system reaches out to nature every time you eat, breath, drink, or relax into a joyous state.

The PNS operates and functions largely in the vegetative realm; all your glands and organs function in accord with the laws of nature that govern plant life, while your SNS functions under the laws of nature that govern animal consciousness, which includes, but exists with total dependence on the PNS functions. Animals have much more fear and territorialism in them than plants do. Imagine having to fight off your trees and plants every time you went to prune them!

4. Invite Them! Just as you can tell when someone’s energy is closed or uninviting and you sense they want to be left alone, or that it may be unsafe to approach them, nature spirits typically won’t approach anyone with that disposition. If they do, it is usually to have fun with them!

Yes, they do love to play games with people! For example, when such people are alone in the woods, nature spirits often create flashes of movement around them, which often scares the hell out of them after it happens two or three times. They naturally feel like something is watching or stalking them. This usually results in them leaving, which is exactly what the nature spirits want for the same reason you wouldn’t want someone walking through your garden, stepping on plants out of their ignorance or stupidity!

By opening your heart and being willing to extend your circle of friends or family, you open the door to a world that can’t be seen through the eyes of fear.

5. Look at the edges of rocks, water, clouds, plants or animals, particularly where the sun touches them.

It is often easier to see them in the morning or evening when there is dew present. The moisture traps their light and reflects it so you can see it.

Fire spirits can often be seen around flowers, particularly in the summer months.

Laying on your back under trees in a wooded area where you can look up through the shade into the light streaming between the leaves and branches often proves fruitful.

6. Bring an offering: By bringing an offering, such as something you really love, like some dates, an orange, or some natural, unadulterated tobacco expresses love and respect.

I’m sure many of you have brought gifts to people who’ve opened their home to you for a stay. It’s a nice way to express gratitude and all life enjoys that kind of love.

If you can’t see them come to the offering, sit quietly, close your eyes and leave the offering in your hand and feel for subtle movement in and around your offering. Nature spirits eat that portion of the offering that resonates with their energetic reality. Just as you need food for your physical body and can’t live off the smell of food alone, nature spirits are very ethereal and consume the ethereal aspects of your offering. So don’t be disappointed if your dates or orange don’t have big bites taken out of them! With eyes closed, you may begin seeing colors, streams or flashes of light in your minds~eye.

These are nature spirits. Once you learn to feel and see them inside you, you are well on your way to seeing them outside you, yet, it will not be your physical eye so much as your third-eye or inner vision that sees them.

7. Let them lead you! Stand in a garden or an area with a lot of plant and animal life (even the little animals like salamanders and frogs is fine). Relax yourself and enter into the state of reception you would if you were dowsing. Tell the nature spirits you’ve come to visit and would love a tour of their home. Then, feel your energy field in and around your body.

Just the way a child often pulls on mother’s sweater to get her to follow, nature spirits will give a gentle tug on your energy body and you will feel the urge to walk in the direction of the tug. Soon, you will find yourself standing in front of a flower, plant, or tree, or maybe even a little animal being.

Then, enjoy feeling and exploring the relationship and let it take it’s own course.

8. Be patient! Just as it can take years to become a good horse or dog trainer, no matter how much you love doing it, it can take time to develop the ability to feel and see nature spirits.

If you become child-like again – innocent wonder, you will progress much more quickly.

Being “serious” is a major impediment to developing a relationship with nature spirits.

By simply practicing love and respect for nature, you invite the rest of you into your being.

I hope you enjoy practicing so you can come to see and feel the beauty and majesty of nature.

For those who would like to learn more, a great introductory book I recommend is The Kingdom of the Gods:

Another couple of books you may find helpful to better understand nature spirits are by Rudolf Steiner:

Enjoy connecting with the spirits of nature today!