Today I thought I’d share some thoughts on meditation.

Sometimes the TAO is referred to as “THE DRAGON”.

Dragons are mystical creatures that both are, and aren’t. They “are” for those that can perceive the subtle energy forms present in, and emanating from the elements (earth, water, fire, air and ether/space). They “aren’t” for those who’s mental conditioning, by necessity, creates boundaries between the spiritual and material realities.

When we are born into corporeal life, a curtain is progressively drawn between the spiritual and physical realms so that we can individuate. Without becoming an individual (forming an ego), there can be no self-perception.

A way to perceive what I’m sharing here can be enhanced by revisiting the process of embryonic development. We all begin our corporeal life as a single cell in the mother’s womb, which is germinated by the father’s sperm. That single cell serves as the seed of creation, which becomes an entire body of a variety of cellular forms. If we remained as a single cell, we could not develop limbs, a mouth, or the capacity to contribute to creation in a uniquely human way. We could only experience life as a single celled organism. 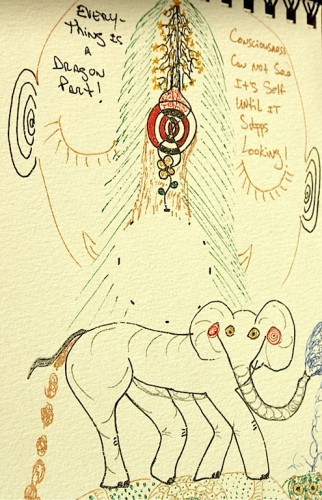 In my diagram, you see an elephant at the bottom. The elephant represents the marriage of elements; the elephant is earth, water, fire, air and exists in, and as space itself. The elephant provides elephantness to nature, which is essential to nature wherever elephants can be found. When an elephant looks, it sees either elephants, or something other than an elephant.

The elephant is unlikely to see a human or a lion and develop aspirations to become a lion or a human being for the simple reason that it’s consciousness extends only to being an elephant. It’s imagination is limited to elephant reality, which doesn’t seem to include things and creative potentials outside those that are natural to an elephant.

The Dragon of TAO, lives in and looks or experiences it’s Elephantness through the elephant.

The human being grows through a vast array of developmental stages, which include the entire history of it’s evolution through nature.

Once the infant becomes a child and starts to learn what it is, and what it isn’t, it no longer perceives the dog, cat or elephant to be part of itself. This leads to the creation of an individual that may have the perception that it can survive without concern for the elements, plants, animals, and even other human beings.

This potentially dangerous reality is necessary for the individuation process, which will produce pain along the way; if the child knew it’s dogginess, it would also know that pulling a dog’s whiskers will trigger a need for the dog to protect itself, which may come by way of biting the whisker puller. With each painful event, education with regard to the reality of each idea emerges, as well as “awareness” as to the relationship between one’s “self” and any given idea.

Both painful and joyous experiences obtained in the state of ego-consciousness trigger reflection.

These experiences open our imagination. You can see the imagination of children as it emerges because they often act like other creatures or beings, expressing their imagination.

A child that dreams of dragons can develop a much better awareness of dragons than people that write books about dragons because their programming is not yet so developed as to believe that they can’t be a dragon. Through acting like a dragon, they gain contact with the dragon within themselves.

If the child’s imagination is not stunted by parents and teachers, the child develops the ability to use it’s dragon-consciousness to gain dragon perspective, allowing it the ability to solve problems in ways that can’t be perceived by those that are limited to cat, dog, or elephant consciousness.

MEDITATION
As we reach the point in our own spiritual evolution where we recognize the limitations of our own idea-set, the pressure of confinement typically encourages imagination; we look for novel ways to get out of the bind we perceive ourselves to be in.

When I was a child, I had to go to bed at about 7:30 PM each night, which I HATED. After a short while of captivity, I began laying on my bed dreaming. I found that I could fly out of my room very easily. I could go to my tree fort, or out to the barn yard and visit my favorite cat, or high up in the sky to see our entire farm.

Through this process of active imagination, I came to realize that indeed, I was never truly trapped, only my body was.

Because this imaginative process required relaxation, I learned that relaxation is essential to opening the consciousness to other possibilities.

In time, I found that if I stayed awake and watched the dream instead of entering into the dream, I could see how everything was connected – how each being or thing in the dream was essential to the existence of each other part of the dream; I saw that the elephant couldn’t be an elephant unless there were things for the elephant to eat and a place for the elephant to live.

I realized that I could teach my dogs and cats new things that aren’t typically learned by them without human interaction; I suspect you’ve seen dogs sitting in the drivers seat looking as though they want to drive the car!

As I practiced meditative awareness, I kept looking for the boundaries of the connections to people, places and things. I found that ALL OF THEM depend on space for their existence.

Naturally, I wanted to dream myself as space. When I did that, everything in existence seemed to emanate from me just the way my arms and legs emanate from my torso.

I then realized that I was still looking at myself in and as space and all it contains. My curiosity led me to want to know what is looking since it can’t be space itself or I would have no perception that what was looking was other than space.

To perceive anything, there has to be some form of movement for the same reason you can’t perceive the contents of a movie without movement of the film relative to the light source.

In time, when I became brave enough to dis-appear, I began having experiences of being one-with All things, yet, being none of them.

I found myself inside THE DRAGON, around which there is no-thing. The Dragon is both Consciousness, and conscious “of” itself.

The Dragon, I found, cannot look out, for there is nothing outside of Consciousness. The Dragon can only look within, for it IS THE DREAMER. There, I was not born yet. I had never died.

I was as a child sitting on the beach playing. I would spend all the time in the world creating castles, creatures and people. At the end of each creation, the tide would come in and take it all away.

Sometimes I thought it was funny. Sometimes I was sad because I was so in love with what I’d created.

Each time though, my imagination grew stronger and stronger and my confidence that I could create and recreate anything grew. After a while, I imagined I could float my creations. I began to create universes full of my favorite things and beings and set them afloat on the see of Consciousness.

Why!because I could and it is fun!

After a while, I felt as though I’d created everything I could imagine and I went to sleep, only to dream again.