GENIE IN A BOTTLE

← The Marketing of Madness Divine Mother ~*~ → 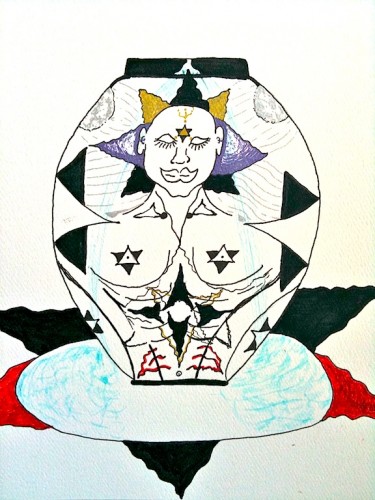 We have all heard stories about genies being trapped in a bottle. Often, the bottle is found floating in a stream, river, or in the ocean.

Then, out of curiosity, the bottle is opened and the genie comes out.

Typically, the genie grants you a wish, or sometimes three in return for freeing them.

I know of one instance where a musician was going through hard times pleasuring his lovers. After a long night playing his piano in a beach-side bar, feeling a bit deflated due to his inability be as studly as his lovers wanted him to be, he went for a walk.

He too came across a beautiful old bottle shaped like an antique vase with a large cork lid in it and some mysterious looking liquid in it. He picked it up and held it up in the moonlight.

As he looked through the liquid, he saw a beautiful mysterious looking genie-man who was waving and pointing up to the cork and signing to him to pull the cork. He was shocked at what was occurring and without realizing that he was actually believing what he was seeing, he pulled the cork.

The genie emerged as a cloud of color and sparkles and materialized right in front of him. The genie was a strange and interesting looking man; he looked like Mr. Clean with a white turban, beautiful jewelry and baggie pants.

The genie was so elated to be released after being stuck in the bottle since 1472 when he was tossed off a pirate ship, he offered the pianist any wish in return for freeing him.

The pianist thought about it for a minute and couldn’t help but think of all the times he just couldn’t take his women all the way to orgasm, and like many men, thought it was because his penis was too small.

He then thought, “now’s my chance to fix this problem once and for all!”

So, he asked the genie, “could I have a ten inch prick?” The genie said, “Sure! Go home and your wish will be granted soon.”

He woke up the next morning and pulled the sheets back.

He was shocked to see that there wasn’t any change yet. He thought maybe the genie had tricked him.

Each time he went to the toilet, he checked to see if his wish had been granted. This went on all day.

Later that night, he was playing the piano for a large group of people at the bar. After his first song, the audience was applauding him, yet, he began hearing obscenities being shouted at him. He looked behind him, to the right, to the left and though he could hear all these hecklers, he couldn’t see where they were coming from.

He spun around on his piano seat and as he reached to turn the page of his song book, he saw this tiny man standing on his piano shouting at him telling him he was no better at the piano than he was in bed and that not only was he boring to the ladies, but the men too!

The little man responded! “I’m the ten-inch Prick you asked for!”

Needless to say, the pianist was frustrated and confused.

From that day forward, everywhere he went, his ten-inch prick was there trying to steel the show. Trying to knock him off his game.

For a while, this was very disconcerting, then one day, a friend came to him between songs and asked if he’d like to hear a great joke?

He said, “sure,” and under his breath, he said, “anything would be better than listening to this ten-inch prick.”

So his friend told him a great joke. “How do you know when you’ve had a great blow-job?”!

He thought hummm, if this guy only knew!

“You have to pull the sheets out of your ass!”

Before he could even figure out the punch-line, his ten-inch prick was rolling all over the lid to his grand piano laughing his ass off hysterically. With tears in his eyes, the little ten-inch prick said, “Don’t you get it stupid, don’t you get it?” All the while gesturing as though he was pulling a sheet right through his ass.

Finally, the pianist got the joke and was laughing so hard with his ten-inch prick that they were both rolling around in tears.

In fact, he didn’t realize the whole bar was watching and pretty soon, they were all cracking up at him because his laughter was so infectious.

From that day forward, he found that all he had to do to stop his ten-inch prick from heckling him was to see the humor of his situation.

If he couldn’t stop him from heckling, he told his ten-inch prick a joke and as long as he was laughing, he was supportive.

Soon, everyone who couldn’t see his ten-inch prick noticed that he was talking to himself and then he kept cracking up so they asked, “what he was doing that was so funny?”

So, he told them, “Well, to be honest with you, I’ve got a ten-inch prick that won’t shut up unless I tell him a good joke!”

Well, naturally, the women were very interested and the men became jealous. But a few people said, “Why not tell us the jokes too since they seem to be so funny.”

So he began telling the jokes out loud between songs. People began laughing so hard they would forget to eat and drink and all they wanted to do was laugh and dance.

He discovered that as long as he could keep his ten-inch prick satisfied and share how he did it with everyone, then everyone was satisfied and no one seemed to remember to criticize him.

He also found that he had more and more women wanting to bed him so they could meet his ten-inch prick.

When it came time to have sex, he naturally had to admit that he didn’t have a ten-inch penis, just a ten-inch prick and told them the story.

He found himself laying in bed with many beautiful women laughing out loud.

Finally, his ten-inch prick suggested he buy some expensive silk sheets so he didn’t get so many blisters in his ass!

In time, he learned that by keeping his ten-inch prick happy and listening to his advice that joy, pleasure and freedom sprung up all around him.

He then realized that the genie had given him just what he needed, which, in the end, worked out to be a few more blisters than he’d ever had, but was still much better than what he thought he wanted!

The pianist and his ten-inch prick lived happily ever after, creating love and happiness through humor with people everywhere they went.

Have a beautiful day!and be careful what you wish for!