Good Wednesday to You!

I hope you are all enjoying the sun and getting some regular movement while drinking lots of good quality water.

My day was full yesterday, to say the least. I felt like I got to work and moved non stop until the end of the day.

I managed to sneak a little medicine ball workout in outside in the sun, which was a nice change. I took my 16-pound D-Ball and just kept tossing it in a variety of ways for fifteen minutes and jogged from toss to toss.

Amazing what you can do in a short time if you just keep moving.

I got home and enjoyed a nice tai-chi session with the sun as it set. After that, Rory and I ate a lovely Vidya cooked meal and I continued to work on a new piece of art. I’m taking my time with this one and it’s shaping up to be pretty cool so far.

We’ve covered a lot of ground on our way to understanding the basics of the CTP. Our next symbol is the seventh symbol down from the top of the CTP you see here.

The symbol that shows the scowling face with a broken heart, a lightening bolt in the stomach, and another one in the sigmoid end of the colon represents the limbic/emotional centers of the brain. 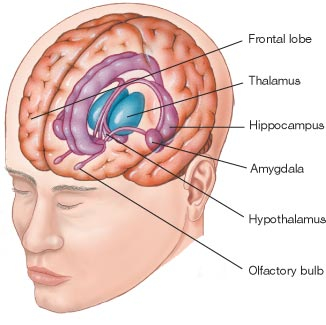 The limbic system is located where it is on the CTP primarily because the CTP is based on survival reflexes that are woven into the structure of the central nervous system (CNS).

The limbic system is a vast network of brain and body circuits that is responsible for our sense of emotion, as well as being interwoven with many of our other senses, such as the experience of time.

At the time I created the CTP, I was well aware of the research in psychoneuroimmunology regarding the physiological affects produced by negative mental-emotional states.

I’d seen a large number of people that expressed a negative disposition toward their injuries and I could easily see how that was holding them back from a full recovery.

Because of the level of complexity of my assessment protocol, I could track each individual patients progress from evaluation to evaluation and it became obvious that those that made repeated negative statements inwardly or outwardly regarding any part of their body continued to have problems that reflected their own judgment of self.

I found in many cases that I couldn’t facilitate a full recovery without encouraging the patient to express their pent up emotions, thoughts and feelings about their injury and all the issues related to it that were causing them stress.

In many instances, I chose to help people find ways to get retrained for a new job that was suitable for them. I some cases, it was very helpful to allow the person to express their feelings to someone unbiased.

It was easy to see that the connection between organs and emotions expressed in traditional Chinese medicine was indeed accurate.

With this knowledge, I created the symbol such that the grimacing look represented angst, or challenge with what was being experienced within.

The lightening bolt through the stomach represents the common phrase, “he/she makes me sick to my stomach”.

The lightening bolt in the rectum end of the colon represents the commonly used phrase, “he/she is a pain in the ass”.

I saw that whenever someone repeatedly used such language, their body responded in kind, creating a physical representation of their dominant thoughts!

Additionally, as stress rises, people can experience the creation of their own disease states, degrading the functionality of any of the systems represented by the CTP, again making the limbic/emotional symbol mobile.

What this exemplifies, sadly, is that the medical model is very ineffective at large. Medical doctors are trained not to get personally or emotionally involved to their patients.

The average medical doctor visit lasts six minutes. Hardly time to get to know or understand anyone, but just enough time to write yet another drug prescription!

When you consider that pain is technically an emotion, it becomes evident that effective medical treatment (particularly where chronic ailments or diseases are concerned) needs to have a strong mental-emotional component if legitimate healing is ever to be achieved.

My understanding and experience of the mental-emotional reality of pain and dysfunction and my experiences dealing with it were very influential in the creation of my Personal, Professional, Spiritual Success Mastery program (PPS).

My PPS program is an on-line learning platform that takes people through lessons that are commonly needed to harmonize the mental-emotional state with a clearly stated dream or direction.

The lessons are oriented around the 12 most common themes or mental-emotional challenges I saw stopping people from healing and living fully in my clinical practice.

You can learn more about what is available to you there by visiting www.ppssuccess.com. The first three lessons are the foundation of long-term healing for most people. 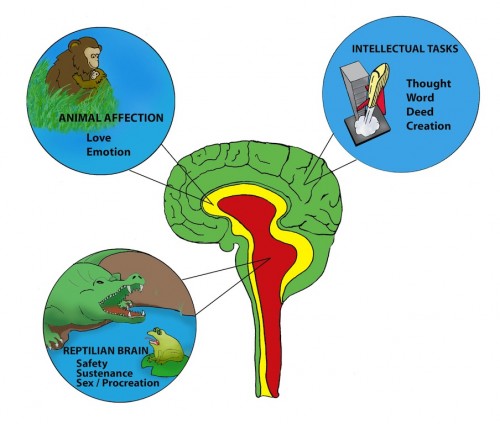 Paul MacLean’s extensive research provided ample objective evidence that what we refer to as “our brain” is actually three brains interwoven to become one.

As you can see in my diagram, the red section of the brain that represents the ANS is labeled the reptilian brain because reptiles don’t have much more brain structure than we do at this level of brain development.

As creatures evolved in nature, their brains changed, growing under the influence of environmental demands to become progressively more complex.

Once we get to the paleomammalian (old mammal) class of animals (those with horizontal spines at large) (the yellow portion of the brain in my diagram), the limbic system begins to form.

In the neomammalian class of animals, the limbic system is more developed and it continues to grow in complexity in humans.

What is important to realize when assessing the affects of people’s emotions on their state of well-being is that limbic expression of stress affects the autonomic nervous system first, and most quickly causes measurable changes in autonomic functions.

In general, most professional therapists that work in orthopedic rehabilitation take little notice of autonomic function or dysfunction, as that aspect of health and healing is typically thought to be the domain of neurologists and other medical specialists.

I have found in my clinical practice that as limbic energy (pain and emotion) increases in magnitude and duration, a wide variety of autonomic functions become aberrant, leading to many doctor visits, and usually many drug prescriptions.

Most of these approaches only drug symptoms and rarely ever address actual causes, leaving people forever chained to drug therapies that are typically expensive and toxic. T

he long-term result is typically progressive complication of their overall symptom profile and degradation of health.

Common symptoms of elevated limbic stress that I see are:

3. Poor digestion and disruption of metabolic pathways and their functioning.

5. Changes in circulation, such as having chronically cold or sweaty fingers.

6. Problems regulating body temperature that often indicate the onset of hypothyroidism, which is usually results from chronic adrenal stress.

A key feature of limbic stress syndromes is that they typically follow a pattern similar to brain changes seen with traumatic stress events.

The research on post traumatic stress disorder and depression show many common correlations to those seen in people with elevated limbic stress patterns.

Many people do not have a specific traumatic event they can locate as the etiology of their symptoms.

What I do see quite often is that their stress patterns and stress expression is often a conglomeration of the unresolved issues throughout their entire life.

If a person can’t make meaning of their life or find a direction they are congruent or harmonious with, the breakdown process begins.

When an individual falls into the trap of repeated negative self-talk, they often unknowingly both reinforce their pathology, and increase its magnitude.

For those of you wanting help to resolve the issues that are commonly correlated with addiction, obesity and disease, I’ve created a comprehensive self-help audio/workbook program titled, The 1-2-3-4 For Overcoming Addiction, Obesity and Disease that you can purchase from www.ppssuccess.com.

This program takes you step by step through the basic healing process I use with my patients and clients that show symptoms of limbic dis-integration and the many other factors related to chronic health problems of body and mind.

I hope you’ve enjoyed our dialogue on the limbic symbol of the CTP today.

I’ll look forward to sharing more with you tomorrow!