Thanks again for all your feedback on yesterday’s blog. I had a very busy day coaching, interacting with students and staff, and working on new video presentations for www.chekconnect.com yesterday.

For those of you that may not be aware, each month I create a video of 20-40 minutes answering questions from chekconnect.com members. I also produce a monthly message, which if I remember correctly is a subscription-based program.

There is a LOT of free, immediately applicable self-help health and well-being information my instructors and I have created for anyone that is ready to take the reins of their own well-being.

Today I’m dong a photo shoot with Muscle and Fitness Magazine. They plan on publishing a spread about me for the August edition, just in time for my 50th b-day!

I’ve written several articles for them in the past and they decided it was time to revisit my work and philosophy.

They sent writer Mike Carlson to interview me a few months back and he was pretty surprised to find out what the CHEK approach entails, to say the least.

Mike was also admittedly challenged to determine how he would position my viewpoints because they could easily conflict with the general them of the magazine, and most all such magazines.

I encouraged him to trust his inner-voice for guidance and was confident that what made it into the magazine would carry enough of a fresh look at health and conditioning to offer some different perspectives for the readership.

Yesterday, I also had one of my best deadlifting sessions in the years since I hurt my neck doing a lifting stunt. I was able to pull 365 pounds for 4 sets of three off a step-box followed by two additional sets of 3 with 315.

I coupled the six sets of deadlift with reptilian crawling for deep core conditioning.

I’ve found that all my rock lifting has strengthened my body in a very multidimensional way that shows up as significant strength gains in the gym, which is lovely. It gives me more reason to play in my rock garden more often! 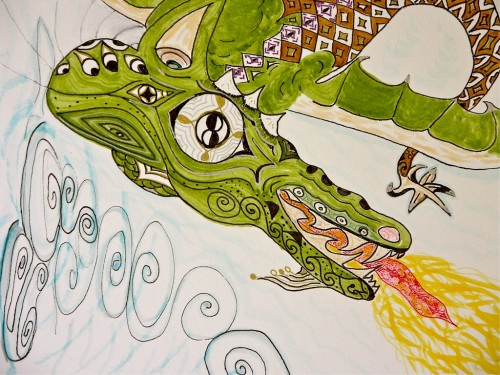 Dragons are mystical creatures. They have been talked about, imagined, drawn, and believed in by many throughout antiquity.

In some Chinese philosophy texts, dragons are said to live in the veins of metal deposits throughout the earth. Some such philosophers have warned that mining metals from the earth upsets the dragons and encourages them to cause havoc among those that are being disrespectful to them, and their earth-home.

Though I know of no objective evidence that dragons do exist, it is quiet surprising how many people really do believe in dragons, read books about them, and love movies with dragons in them.

Further, Chinese cosmology believes that THE DRAGON (the unspoken TAO) has a favorite hobby. THE DRAGON loves to create new universes.

THE DRAGON always tells them, “This is your universe. The two of you can rest when you can get along with each other.”

This is quite a trick THE DRAGON plays on its children! Why? I’ll share my perspective.

The female and the male, though very much the same in construct, are different enough in their composition that they can’t ever possibly have identical views on anything of significance.

For example, they may both agree that water is wet, but they are very unlikely to agree on how to best deal with a water shortage. Yin may feel that water must be tightly conserved so there is enough for the children. Yang may feel that if he doesn’t take a big drink, he may not have enough energy or the ability to find food effectively.

So, just imagine if you were camping in the wild with your lover and got lost and ran very low on water without any knowledge of where to find water or when you may find it. It is well known that when food and water run dangerously low that people that “love each other” can, and do actually kill each other in attempt to survive.

Yang’s desire to take a big drink so he can hunt effectively is “his” male perspective on how to best handle the situation and keep the family risk of dehydration to a minimum, yet is opposed to yin’s view of the issue.

How you and a lover handle the same situation will be based on the same concerns. So now we can look into this challenge with a different perspective, which I will use as a means of the danger of chasing thought-dragons.

The above scenario is based on the belief that there is a water shortage. But is it true?

The earth’s mass is about 2/3rds water, roughly. Therefore, we know that there is water underground in most places.

We also know that with knowledge and the right skills, water can consistently be found, even in the middle of the desert. A good dowser can even determine the depth of the water quite accurately.

If yin and yang had the knowledge of where to find hidden water, chances are very good that they would simply unearth it and the problem would be solved.

Both the dragons and the campers could actually be sitting atop an underground river without even knowing it! They may also be unaware of many methods for finding water or how to perform emergency water conservation tactics, such as drinking your own urine.

What emerges from the understanding that thoughts are largely based on prior programming and the resultant beliefs is the fact that all beliefs are dependent on other beliefs or conditions.

Just on the other side of the mountain, there are dragons that had were a little more mature and wiser. They had learned to listen to the water and learn it’s secrets, and therefore, knew how to dowse water. They never have water problems because their knowledge base is more complete. They may have also learned to use their imagination and intuition more effectively.

We can easily imagine then, that the thirsty dragons may find themselves in some very challenging situations.

A hungry female alligator will eat her own children if she gets hungry enough! If the thirsty dragons knew of the other dragons and their knowledge of water, they may be inclined to ask for help.

Yet, if these dragon families were in religious conflict, territorial conflict, or otherwise despised each other, they may be more willing to die of dehydration or from consuming each other than to succumb to their pride.

While the thirsty dragons or people are getting deeper and deeper into their (perceived) emergency state, an onslaught of thoughts will run through their minds.

These thoughts can range from those about ways to conserve or find water, to “oh shit! Were going to die!”, to I “If we don’t sacrifice on of our children, we are all going to die”!to, “you are such a bitch! I can’t believe I got stuck without water with you!”, to “God must be angry with us”!

Any or all of these thoughts may actually be believed. This is where reality emerges: any thought you believe is true “to you”.

If you believe there is no water and the other dragons won’t help you because they hate you and you don’t know how to find hidden water yourself, those beliefs may well be the end of you.

If you believe that losing pride is better than dying and are willing to go to the water-smart dragons with a peace offering of something that you do have to share that they may find valuable, that change in belief may save you.

If that doesn’t work, you and your fellow dragons may fall back into your stupor of disbelief about your own survival.

If I were with you, I would suggest we spy on the other dragons and learn where they get their water from and/or how they find it! It would be better to risk death going for water that you know for sure is there than to die from a lack of creative problem solving, imagination, intuition or limited beliefs.

Next time you are dealing with your own (personal) dragons, ask yourself the following questions:

1. Is my belief really true? Chances are very good you may not have enough knowledge to answer that question authentically. Will your pride get in the way? Will you act like most men do when they are lost in their car and keep driving because you don’t want to look less manly by asking for directions?

2. Do I have any authentic experience of my own in this regard, or am I making decisions based on ideas passed onto me as fact when in reality, most ideas are theories presented as facts?

3. Are my ideas creating what I want, or what I don’t want?

4. Are my ideas the product of an unmet need of my own? Am I willing to meet my needs and do the work to make sure my ideas are based in reality, or is it easier to make others wrong and coerce them into believing that my problem is their fault and therefore, they should fix me?

6. Is my problem offering the necessary resistance I need to cultivate more awareness of what IS possible?

This I call Dragon taming.

It is worth remembering that:

Most people’s thoughts, and therefore beliefs are based on incomplete, subjective, or completely incorrect ideas and are seldom based on any objective facts.

Look for example, at the thousands of Christians that vehemently believe that the earth is only 4-6,000 years old, flatly denying scientific methods of carbon dating, atomic decay methods of dating, and many others. Flatly ignoring the fact that fossils of creatures that are millions of years old couldn’t have possibly formed in 4-6,000 years!

When we look at the world and all its perils (water shortages), it’s easy to fall into a slump of sadness, anger, frustration, disbelief, etc.

When we try to figure the world out with the limited knowledge most of us have, we are unlikely to ever succeed. Yet, many find it easier to stay angry than to convert their ignorance into wisdom by genuinely attempting to find water.

All ideas, EVERY ONE OF THEM is codependent upon other ideas. You can fret all you want about why your roof leaks but until you understand the nature of foundations, walls, and framing, you are likely to be patching roof leaks for ever!

A true sign of wisdom is knowing what you don’t know, and being intelligent enough to find others that authentically demonstrate that they do know.

Well, I hope your weekend is relaxing, fun and that you enjoy taming your dragons.