May this day bring you joy!

Today, we continue our journey into the issues of brain~mind balance with an exploration of how the intellectual soul develops.

I’ve spent a fair bit of time explaining how the infant begins preparing for the environment it is being born into by learning through its mother. We’ve also discussed issues of how the family environment programs the infant and how critical the environment is for optimal infant development, and I shared the importance of exposure to nature and unbound play for essential development of the right-brain faculties as a necessary requisite to left-brain development. I’ve shared how the archetypes of the child, victim, prostitute and warrior commonly emerge as themes in our lives, and I’ve shared some of my knowledge of how we learn language first as gesture and how an infant begins very early reading faces and body language.

I explored how pronation postures (moving toward the fetal position) express the concept “No” or exclusion, and how supination postures express the concept “Yes” or inclusion. I shared my concerns regarding exposing children to reading lessons (linear thought processes) before the age of 7-10 (depending on the child’s ability to integrate the world of wholeness with the linear functions of division and deduction).

I’ve suggested short exercises for inner-exploration so that you may identify just how much of your personality and operational software are derived directly from your parents, and I suggested that to the degree your parents and family members are challenging to be around, they show you where you shadow is; your shadow, which was their shadow is now being reflected back to you by the people “most like you” so you can see and experience it.

In metaphysics, this is called “The Divine Mirror”. I hope you are ready to go another step deeper into this critical issue that so challenges humanity and the world today.

Human beings are very unique creatures in nature. They have, over time, accumulated one of the largest brains relative to body weight of all in the kingdom of nature. In my studies of the history of religion, anthropologists and psychologists (and other specialty sciences) have suggested that religion began at the time when man first killed another man and realized he didn’t have to do it. This, as far as scientists can tell, signifies the first point at which man became capable of “self-reflection”.

At this time, researchers suggest (and I find this to be a rational hypothesis) that man first became aware that there was a witness within that was above or behind his thinking mind; something was witnessing without actually doing or becoming entangled in events. This witness, for thousands of years now, was thought to be God within – sometimes referred to as our personal-God.

Thousands of years ago, the total collection of ideas in a human beings head, even at the point of old age, would have been but a fraction of what even an elementary school child would have to have to survive the intellectual environment we live in today. Man would have had to live with acute awareness of the environment to survive and most all of the knowledge acquired would have been functional knowledge by necessity of survival.

Imagine what would have happened if the animals were migrating or it was time to plant crops and everyone was so enthralled with surfing the internet or watching soap operas that they became complacent and didn’t hunt or plant? Can you see how too many ideas could easily become an impediment to survival – sound familiar?

The soul develops through several key stages. The Soul is consciousness itself. In philosophy, the term World Soul refers to the Soul of the Universe or God-Consciousness. Though the Universe is the biggest measurable thing we know (and we still don’t know with any assurance how big it is because it gets bigger every time we build a bigger, better telescope!), it is still composted of much more space than matter.

The consciousness that governs the universe can’t only be outside matter, or there would be nothing to inform it; if you had no consciousness within you, could your biology carryout some six billion biochemical reactions a second and keep you alive throughout your many exploits?

Consciousness can’t only be inside matter (bodies), for if it were, it would be beings like us that would have to constantly maintain control over the vast expanse of stars, planets, moons and the myriad of bodies in space, and most people can’t balance a check book today; research shows that ~98% of Americans are one paycheck from bankruptcy! Consciousness then, must be All Pervasive.

The material soul is formed whenever the creation of something with an inside and an outside is created. Could you be conscious of “yourself” if you had no inside and outside? That’s worth meditating on! If you could, would “you be you”, or “would you be ALL?”

About 3.5 billion years ago, biological life emerged on earth. This signifies the point at which the material soul (which evolved for eons prior) evolved into a biological soul. When atoms conglomerate, over time, they become molecules. Molecules conglomerate to become cells; considering the vast complexity in any single celled organism, it would be somewhat silly to think that there was no apriori (prior) intelligence. Thinking that intelligence emerged in and as biological life would be like thinking that one could build a space ship with no prior knowledge! Thinking that intelligence is the sole providence of brains fails to ask a more essential question!what created brains?!

The biological soul then, is exemplified by any living organism with self-awareness; knowledge that what is inside is different than what is outside itself.

As a general theme, it can be seen that as each organism becomes more complex and has a longer life span, the period of puberty gets longer. This signifies that there is more and more to learn as necessary for survival as organisms become more and more complex. The longer an organism survives the more exposure it has to potential threats to it’s survival, and therefore, a greater amount of intelligence is needed for survival.

Our DNA carries genes that correlate directly with the evolutionary process the human organism has gone through from the beginning of the formation of bacteria, viruses and fungi right up to the time of your birth. The DNA contains information vital to the function of all your biological systems; most of which are autonomic, yet, possess VAST INTELLIGENCE!

Prior to the point at which man’s capacity to think and perceive reached the point of self-reflection, man’s intellectual endowment was largely concerned with meeting essential basic needs, such as finding water, finding food, creating shelter, caring for offspring, understanding environmental and/or seasonal changes, and how to protect himself. The key point here is that man’s knowledge was functional – it was essential to survival.

Man’s material soul had acquired and accumulated enough complexity to create biological life and now had progressed for millions of years to reach the point of self-reflection. Self-reflection triggered intense fear in man, for man could not figure out what was witnessing within, which triggered a massive barrage of “thinking”, dialogue, discussing, debate – and religion was born!

In many regards, this event signifies the birth of the intellectual soul, for prior to that time, man’s thinking was largely devoted to survival in much the way any other mammals is. 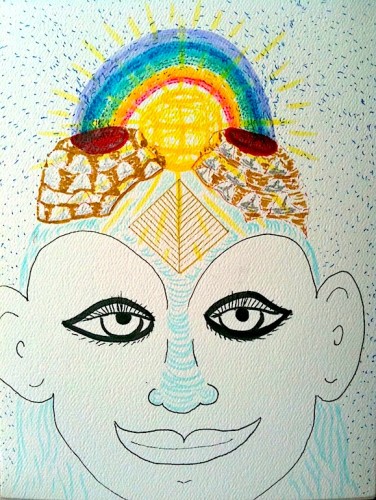 The Gift And The Curse Of The Intellectual Mind-soul

As you can see in my drawing, it is only when the left and right brain hemispheres are balance that we can authentically perceive what is in the light of mind. The right-brain makes the connections to the world (and universe) at large that allow an individual ego-mind to determine how any idea “fits” into the larger scheme of life.

When children (and adults!) are exposed to ideas that can’t be integrated and interpreted relative to an understanding of wholeness, their psyche becomes fragmented. Because our entire (dysfunctional left-brain dominant) educational system has immersed itself into our family, tribal, social and cultural milieu, we’ve become people who identify ourselves as successful when we can memorize massive amounts of data so we can pass tests. Our ability to pass tests is largely how we rank ourselves in society; if you have no degree, you are some kind of miss-fit and aren’t worth much to an employer and are not perceived to be capable of making a substantial living; if you have a bachelors degree, you are employable and have demonstrated that you are “intelligent” (which means you can follow orders); if you have a masters, your earning potential is significantly higher and you are deemed a “specialist”; if you have a doctorate, you are deemed academically successful and most valuable in an industrialized society.

That said, we must ask ourselves, is this really true?

My study of millionaires and billionaires has shown that there are as many with high-school education or less than there are with university degrees.

We have more children in schools than ever; we have more scientists, lawyers, politicians, doctors, nutritionists, therapists, psychologists, and most any form of professionally educated group of people than you can imagine. Are we doing any better with regard to both meeting the essentials of survival, or creating well-being among ourselves than we did before the advent of the modern educational systems, or are we just making better toys, more pollution, more drugs, more pollution, and fighting more religiously motivated battles than ever?

We now have the greatest level of separation between the essentials of survival and harmonious living with the planet than ever. We now have the most physically, emotionally, mentally and spiritually ill cultures than ever, yet, “we are so smart!”

So, as you can see, the birth of the intellectual soul has come with some very significant challenges – challenges that literally threaten the survival of humanity today.

Just to recap for clarity, the biological soul is that which is driven by life’s desire to survive while the intellectual soul is driven by the desire to create and understand that which resides within us as “the witness”. Though the challenges may seem daunting at times, as I will show, the challenges of the intellectual soul are the gift that brings us into “awareness of what does, and does not create effective co-creation with Mother Nature”.

Said another way, the intellectual soul may serve to help us recognize what does, or doesn’t create authentic love. It is not the intellectual soul, but the awareness soul that evolves from the biological-soul that ultimately answers the question of “who you are” – but you must know how to get there. That is the providence of religion, which sadly, as failed miserably; that failure stems from turning religion from a “quest for Truth and Union” into a “for profit business endeavor.”

By the way, religion is the most profitable business in the world today!

In Part 7., of this series, I will discuss how increasing the complexity of ideas without brain-mind balance leads to a perpetual sea of challenges, which are clearly upon us today. I will share my knowledge and experience of reading energy fields (auras) and what I see in the thousands of people I work with as an educator and the large numbers of patients I’ve seen over my now 27 year career, and what I offer such people as a means of healing and how deeply challenged they are to change their ideas and behaviors such that they are conducive to living harmoniously.

It is my hope that as you read these posts that you make distinctions that help you be more functional as you use your biological and intellectual awareness with your self, loved ones, clients and in your community in general.