I hope you have found your flow for the week.

I’m back in the saddle here at work now after some MUCH needed time off. I’ve had my feet in the dirt and my hands on stone regularly since arriving home and it’s been lovely for my body and mind.

It always amazes me that even after years of studying and practicing Taoism and zen that when I get a few days or a week off, my mind wants to keep working!

The mind is an amazing gift from the Universe, but like the Universe, it loves to keep moving and creating ceaselessly. The mind is like a coffee pot that seems to keep percolating, even when the plug is pulled!

When we realize this, we can stop trying to figure out how or why it keeps brewing, even when the plug is pulled. Instead, we can relax and watch it with amazement. After all, how do you pull a pulled plug?

By watching the mind, we can witness it without bias. To witness your mind is to enter into awareness.

Once we enter into awareness, witnessing the mind is like watching a great show. There is always a cast. Frequently, the cast includes villains, warriors, a hero or two, a martyr here and there, and seems to vacillate between love and war.

If we reach the point where we’ve cultivated enough awareness to detach ourselves from the projected outcomes inherent in any story, we naturally begin to see that our mind-stories are quite common themes among many.

We see, as we become more and more aware, that most people, without realizing it, are actually living those stories out. Someone have a dream that their lover is cheating on them, and they believe it.

Now, they are always on guard, snooping, sniffing, waiting to catch their lover cheating so they can confirm exactly what they don’t want. When they find a hint of affection come by way of another, they are sure that their partner is cheating on them. Just what they need to finish reproducing last night’s movie!

Yet, so often they forget as they act out this entertaining script that it had a sad ending. Another has a dream of financial disaster, so they wake up at 2:00 AM in a sweat and rush to their computer to start transferring stocks. They create the illusion of safety and two days later, their new investments crash; oh how well they’ve followed the script!

Awareness reaches the point at which it realizes that the full-length movies, shorts, and trailers all hinge upon socio-cultural themes; people largely play the same mind games with themselves and others that others in their culture play.

Then we step back for yet a broader view in awareness. We see that there are even larger themes that are cross-cultural. Those that consider themselves poor ruminate over prosperity. Those that are lost either seek to be found or to find direction in their life. Those that are confused seek clarity.

Soon enough, we get wise enough to stop entangling ourselves with the characters in the stories and we become aware of the themes.

What would an enlightened Sage say to such people:

True perfection does not exhaust itself
trying to appear perfect.

True abundance does not waste itself
in showy displays.

The most direct path
will appear to wind about.

The greatest skill
will appear quite ordinary.

The most helpful words
will appear hesitant.

When we see clearly,
we act with tranquility,
and exactly what is needed is done.

Now, such words, so simple, often fall into the “I know” category and moments after reading them, there is no evidence that one has learned a thing in most instances. Why!because that is the nature of conditioning.

You promise yourself that you won’t yell at your children any more. That you will spare them from your adult follies and allow them the freedom they rightfully deserve and that you wish you had as a child. Yet, the next thing you know, you wake up smack dab in the middle of another one of your little dreams, yelling at your kids.

A dose of awareness and you realize you are living out your parents fears and ideas again!

To avoid that, I will expand on the words of this wise man for you in hopes that a little clarity will fortify the offering and opportunity afforded by a life in Mind:

True perfection does not exhaust itself
trying to appear perfect.

True abundance does not waste itself
in showy displays.

What created you, created the entire universe. A masterful mix of perpetual destruction, transformation, and creation.

The sun is a mighty ball of fire. A nuclear inferno, yet, here you are at exactly the right distance from it to enjoy the light and warmth.

The earth is a ball of love and beauty, yet, once it was a ball of molten rock seething with poisonous gasses. Yet, here you are looking at the beautiful flowers and cloud covered mountains as a deer looks onward at you in amazement.

Imagine for a moment if the sun decided to show off it’s power and doubled its illumination?

The most direct path
will appear to wind about.

*In nature, nothing can go straight without bumping into things. If water flowed straight through rocks, we would have no rivers, no growth, no life as we know it. Water would flow straight to the center of the earth and cool it, totally disrupting the natural rotation of the earth.

The earth would become a waterlogged rock and you could not be as you are. If the path to success was direct, everyone would be successful and we would begin to worship struggling. If everything were straight, the world would be ugly. It would look like a warehouse full of things. 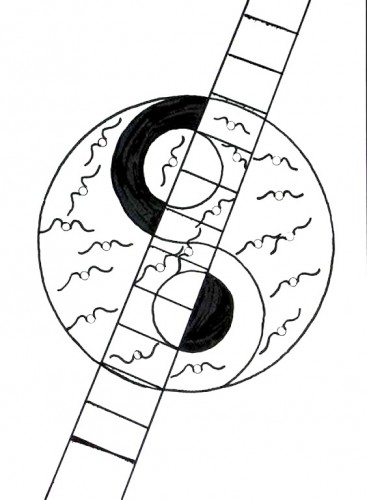 The line through the tai-chi symbol represents Spirit.

Spirit takes the path of least resistance, allowing everything a chance to “BE” what it “IS”.

Your mind straightens the path and creates rulers. Walking city streets does not give the same joy as waking along a mountain trail.

Have you ever seen a deer or a bear start a forest fire or build another shopping mall?

The greatest skill
will appear quite ordinary.

* You watch a great chef. They chop vegetables and cut meat. They put water, salt and spices in a bowl and mix things up. They add a little fire. Soon, you are eating a beautiful meal.

You try doing these simple things yourself, yet, it usually just isn’t the same? You watch someone juggle balls. It looks easy. Try it with eggs? How often do we take the skills that appear ordinary for granted?

Ask any man that has been left with the kids for a day!

The most helpful words
will appear hesitant.

The wise one doesn’t dispense words wildly. They may look hesitant to you, but it is not because they lack words or the ability to explain themselves. It is often because they know that your words, worries and pangs are the product of a conditioned mind.

Their hesitancy only appears so because they are taking a moment to feel your truth; they act as though walking in the woods with bare feet, paying careful attention not to crush the snails. They are hesitant because they know that to help “you”, they must remove “themselves” so they are sure who they are feeling and helping.

This act is a genuine gift, not an expression of neediness or the desire to control you.

When we see clearly,
we act with tranquility,
and exactly what is needed is done.

* When we have lived, we have been given time enough to choose to become wise. Time enough to see through the follies.

We recognize unnecessary effort, unnecessary struggle. We’ve seen and experienced it many times before and we know the difference between an emergency and an escapade. We know how these common stories end!

With that wisdom, we do what is necessary. We live naturally. We travel light. We have learned to see and feel from our center.

When a distraction pulls us from that place of awareness, we are aware and we can chuckle.

We have come to know our dragons and how to tame them. Having tamed our dragons, it is very easy to recognize dragon follies, and with tranquility, we know what needs to be done. Dragon taming wisdom is shared.

The rest is up to you.